voestalpine lightweight innovation: 20 years in the fast lane with “phs-ultraform”

voestalpine lives and breathes innovation, a fact that the Group has proven many times over throughout the years. In 1949, the LD process was the “invention of the century” that instantly changed the global steel industry. And in recent decades, the international company has set new standards in automotive lightweight construction. When the idea of developing an ultralight, corrosion-resistant, yet high-strength “super steel” was first raised almost 20 years ago, it was considered to have little chance of success—yet not long ago, the 300 millionth phs component rolled off the production line. And most recently, the voestalpine invention that is now standard in modern car bodies was approved for series production by the world’s largest car manufacturer.

Today, there is a bit of voestalpine in most vehicles—from small cars to SUVs to luxury cars, both electric and fuel-based. For years, the automotive industry has been demanding materials that are stronger, lighter, more corrosion-resistant and economic to produce. 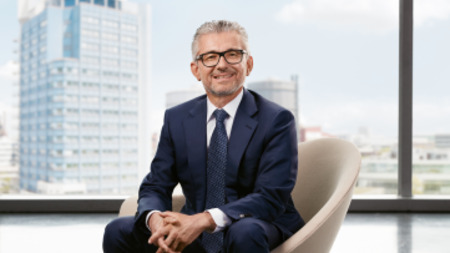 The only way to maintain a technological and competitive edge in this environment is to constantly push the limits of what is possible.

voestalpine succeeded in doing just this two decades ago with steel innovations such as “phs-ultraform”, a hot-dip galvanized, ultra-high-strength steel for lightweight body parts that still holds a worldwide patent. “Groundbreaking developments like phs-ultraform have made a significant contribution in recent years. voestalpine now generates more than 30 percent of its sales in the automotive sector and is considered an innovation leader among suppliers,” says Eibensteiner. Research and development play a central role in this context. To date, around EUR 30 million has been invested in the development of phs-ultraform alone. In the current business year, the Group has budgeted EUR 185 million for R&D.

Today, phs-ultraform is a standard material in car bodies. Depending on the type and manufacturer of the car, voestalpine steel makes up ten percent (standard car) to 30 percent (premium car) of the car body. voestalpine supplies all renowned European automobile manufacturers and their suppliers. The recent approval from the world’s largest car manufacturer for series production marked another milestone in the company’s success story. The voestalpine Group not only supplies the basic material—special steel strip from the Steel Division in Linz, the Metal Forming Division’s automotive companies process it into finished automotive parts. “With phs plants in China, the USA, and Germany, voestalpine is excellently positioned in the most important markets. Thanks to the continuous expansion of technology and the excellent order levels, the 15th plant worldwide will soon go into operation in China,” comments Eibensteiner. In the People’s Republic of China, voestalpine is still considered the only manufacturer of the popular product. “This material innovation has made a significant contribution to voestalpine’s internationalization in recent years, allowing us to move up into a new league in the automotive supplier industry,” explains the voestalpine CEO.

From the idea to innovation leader

The idea for phs-ultraform (press hardening steel) was born in 2002. In 2003, the voestalpine research and development team started the first series of tests. The breakthrough came five years later, and the first major orders from the automotive industry were received in 2008. In 2016, voestalpine became the first manufacturer in the world to set up a plant for a “direct” production process to supplement the previous “indirect” process. This made it possible to manufacture in just one process step, which is ideal for simpler components in smaller quantities.

20 years ago, the customer requirement was to develop a high-strength, lightweight steel with zinc coating for corrosion protection. The process requires a temperature of 900°C, but since zinc evaporates at that temperature the company faced a seemingly insolvable problem. voestalpine ultimately achieved a major innovative breakthrough with phs-ultraform—a world first. phs-ultraform has since developed into a diverse product range for the lightweight construction sector. Premium manufacturers use phs-ultraform for side and cross members, A and B pillars, sills, and bulkheads. The technology also helps reduce fuel consumption while significantly improving occupant safety. As absolute lightweights, phs-ultraform components naturally also play an essential role in electromobility—not only in the body, but also for battery protection. Innovations such as the development of an ultra-light, corrosion-resistant, yet high-strength “super steel” almost 20 years ago provide the foundation for continuing to assure steel’s position as one of the leading materials in the mobility sector in the future.

In its business segments, voestalpine is a globally leading steel and technology group with a unique combination of materials and processing expertise. voestalpine, which operates globally, has around 500 Group companies and locations in more than 50 countries on all five continents. It has been listed on the Vienna Stock Exchange since 1995. With its top-quality products and system solutions, it is a leading partner to the automotive and consumer goods industries as well as the aerospace and oil & gas industries; it is also the world market leader in railway systems, tool steel, and special sections. voestalpine is fully committed to the global climate goals, and its greentec steel program represents a clear plan for decarbonizing the production of steel. In the business year 2020/21, the Group generated revenue of EUR 11.3 billion, with an operating result (EBITDA) of EUR 1.1 billion; it had about 48,700 employees worldwide.