With its figures for the first quarter of the business year 2017/18 (April 1 to June 30, 2017) the voestalpine Group once again demonstrates its unique position in both the European and international industry. The exceptional growth in revenue and earnings, both compared to the first quarter of the past business year and with the immediate quarter preceding, underscores more than ever the value of the consistent strategic orientation towards leading technologies and quality coupled with permanent international expansion which has been followed over the past years.

The voestalpine Group's revenue and earnings performance during the first quarter of the new business year represents a return to the income levels prior to the outbreak of the financial and economic crisis in 2008. Despite the geopolitically challenging times, continuing strong demand from the most important customer segments, especially the mobility sector, and the broad economic upward trend, particularly in Europe, have contributed significantly to these record results.

The operative driver of this growth was, above all, the Group's Steel Division which specializes in high quality steels. It not only profited from a substantially improved price situation, but also from an exceptionally high level of incoming orders.

In the first quarter of 2017/18 the voestalpine Group achieved an increase in revenue of 17.3%, to EUR 3.3 billion (Q1 2016/17: EUR 2.8 billion). While all four divisions succeeded in boosting their revenue, at an increase of more than one third the Steel Division posted the highest level of growth. In addition to significantly higher price levels in a year-to-year comparison, deliveries of HBI (sponge iron) from the new direct reduction plant in Texas to external customers were included in the revenue for the first time.

The voestalpine Group posted a year-to-year increase in all earnings categories which surpassed its revenue growth by far. The operating result (EBITDA) rose by 53.9% from EUR 334 million to EUR 514 million, thereby lifting the EBITDA margin from 12% to 15.8% and raising it substantially above the Group's strategic target level of 14% for the business year 2020/21. Building on the strong and steady performance of the three downstream divisions, led by a globally well-positioned High Performance Metals Division, and operatively driven by the excellent performance of the Steel Division, year over year the Group's profit from operations (EBIT) improved by a total of 96.2%, from EUR 168 million to EUR 329 million. As a result, voestalpine AG achieved its second-best quarterly EBIT (adjusted) after Q2 2008/09. In a year-to-year comparison in the categories profit before tax (EUR 292 million) and profit after tax (EUR 218 million) the voestalpine Group succeeded in even more than doubling its numbers.

Equity at a record level and more than 50,000 employees for the first time

As of June 30, 2017 the voestalpine Group also crossed the threshold of 50,000 employees for the first time. Compared with the level of the previous year, at 50,047 employees (FTE) this represents an increase of 3.6%. A major factor in this rise is the intensive expansion of the Group’s international automotive activities.

Even after the end of the first quarter the outlook for the current business year, as published a little over two months ago at the presentation of the Annual Report 2016/17, remains unchanged. For 2017/18 this means that we may anticipate a substantial increase in revenue compared with the previous year, due to the start-up of a series of new facilities including the HBI plant in Texas, USA and the new wire mill in Leoben, Donawitz in Austria, and several downstream investments in the High Performance Metals and Metal Forming divisions in Europe, the USA and China, as well as the result of having largely secured full utilization of production capacities across the entire corporate value chain. “This positive expectation is reinforced by the most recent macroeconomic growth forecasts, particularly for the European Union and China. Against this backdrop, any possible negative effects resulting from today's highly unpredictable US economic policies will remain within strict limits, at least from our current perspective,” says Wolfgang Eder.

In terms of earnings, following the excellent first quarter we expect the second quarter to be characterized by continued strong demand although also by seasonal effects (production cutbacks due to regular summer plant closures). Contrary to the summer months in years past, due to current strong market growth this should not have a fundamental effect on the overall positive earnings performance in the first six months of 2017/18. However, this does not allow for reliable forecasts on the development of the year’s second half before the end of the second quarter, especially with respect to the ongoing volatility of raw materials prices. 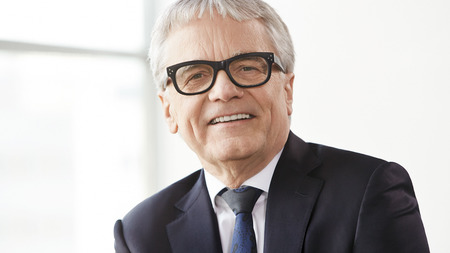 Irrespective thereof, based on the figures for the first quarter, the substantially positive development in both revenue and earnings which is expected for the business year 2017/18 compared to the previous year appears secure.

In its business segments, voestalpine is a globally leading technology and capital goods group with a unique combination of material and processing expertise. voestalpine, which operates globally, has around 500 Group companies and locations in more than 50 countries on all five continents. It has been listed on the Vienna Stock Exchange since 1995. With its top-quality products and system solutions using steel and other metals, it is one of the leading partners to the automotive and consumer goods industries in Europe as well as to the aerospace and oil & gas industries worldwide. The voestalpine Group is also the world market leader in turnout technology, special rails, tool steel, and special sections. In the business year 2016/17, the Group generated revenue of EUR 11.3 billion, with an operating result (EBITDA) of EUR 1.54 billion; it has around 50,000 employees worldwide.