Welding of vessels for the Deep Underground Neutrino Experiment

Catching neutrinos to understand the universe

Neutrinos are tiny elementary particles which travel at almost the speed of light and penetrate right through atoms without interacting with them. They are a billion times more abundant in the cosmos than the particles that make up stars, planets and people. The Deep Underground Neutrino Experiment (DUNE) is one of the greatest scientific projects of our time aiming to unravel the mystery of how the universe came to exist of matter rather than antimatter. In less than a decade from now, Fermilab in the United States will be sending the world’s highest-intensity neutrino beam from their laboratory in Batavia, Illinois through the earth’s crust to be intercepted by cryogenic far detectors at the Sanford Underground Research Facility located in a 1,500 m deep mine at a distance of 1,300 km in Lead, South Dakota. Here argon atoms colliding with neutrinos will release a flash of light and a cascade of electrons that can be measured and analyzed. 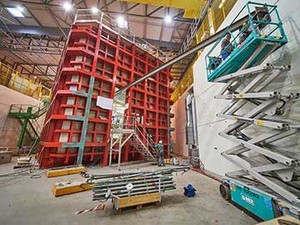