In order to meet the demands of the Group’s consistent internationalization process and rapid growth, voestalpine AG is expanding its Management Board from five to six members as of October 1, 2014. The newest Management Board member will be Peter Schwab, previously Head of Research & Development for the entire Group, who will take over management of the Metal Forming Division. Earlier, this division was headed by Herbert Eibensteiner, who will now take over as Head of the Steel Division. Wolfgang Eder, who has headed this division since 1999 in addition to his role as CEO, will be concentrating on his position as Chairman of the Management Board of voestalpine AG and the continuing internationalization and further strategic development of the Group in its entirety.

Peter Schwab takes over as Head of the Metal Forming Division

With its expanded Management Board team, voestalpine is gearing up for the future challenges it will be facing as technology and quality leader on the global market with a focus on niche segments and customers. Peter Schwab (50) will be the sixth member of the Management Board and as of October 1, he will take over as Head of the Metal Forming Division, which has just under 11,500 employees worldwide and which produces components for automobile manufacturers, primarily those in the premium segment. After having completed his studies of technical physics at the Johannes Kepler University in Linz in 1993, the Gmunden native began his career in the voestalpine Group. He worked in several internal positions and became Head of “Quality Assurance Steel Plant and Hot-rolled Strip” in 1996. Since 2002, he has been Head of Research & Development for the entire Group, supervising several hundred research projects worldwide, 760 R&D employees, and a research budget of close to EUR 150 million. During his tenure, “phs-ultraform,” a premium steel, was developed, which is both ultra high-strength and corrosion-resistant. This product has set new standards in lightweight automobile construction worldwide. 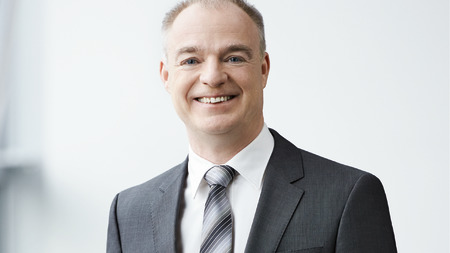 We will continue to expand our leading technological position by pursuing a consistent innovation policy and significantly growing our global presence. Furthermore, we anticipate that growth in the automotive segment and in the sections and tubes segment will result in an increase of revenue from EUR 2.4 billion today to over EUR 3.5 billion by 2020.

Herbert Eibensteiner is the new Head of the Steel Division

As of October 1, 2014, Herbert Eibensteiner (51) is taking over management of the Steel Division, which continues to be the largest division of the voestalpine Group with around EUR 3.8 billion in revenue. The Linz native has been a member of the Management Board of voestalpine AG for two years and was previously responsible for the Metal Forming Division. After having received his degree from the Vienna University of Technology, where he studied business administration and mechanical engineering, he began his career in the voestalpine Group in 1989 as a plant engineer at the steelmaking site in Linz. Subsequently, some of Eibensteiner’s positions included heading Quality Assurance of what is today the Steel Division, and in 2000, he became Technical Director of voestalpine Krems GmbH. With his appointment as Head of the Metal Forming Division in 2012, he became a member of the Group’s Management Board, where he has particularly dedicated himself to accelerating the process of internationalization in the automotive sector. Under his leadership, voestalpine invested significantly more than EUR 100 million in new plants producing components in China, Germany, Romania, South Africa, and the USA. “Even in the Steel Division, which up to now has been focused on Europe, in the future, we will increasingly position ourselves globally with our high-tech products. We continue to invest in our steel base, but in the long term, we will be concentrating on processing activities in the Steel Division in line with the Group’s strategy,” says Eibensteiner, who will also continue to be responsible for the IT sector in the voestalpine Group.

As the largest division in the Group, the voestalpine Steel Division has attained global quality leadership in highest quality steel strip and a leading position worldwide in heavy plate for the most sophisticated applications as well as in casings for large turbines. The division is a strategic partner for well-known automobile manufacturers and major automotive suppliers. Additionally, it is one of the largest suppliers to the European consumer goods and white goods industries as well as to the mechanical engineering sector. voestalpine produces heavy plate for the energy sector that is used under extreme conditions in the oil and natural gas industries, for example, for deep-sea pipelines or in the permafrost regions of the world. Furthermore, the Steel Division is a global leader in the casting of casings for large turbines. In the business year 2013/14, the division generated revenue of more than EUR 3.8 billion and reported an operating result (EBITDA) of EUR 393 million. It has around 11,200 employees worldwide.

The Metal Forming Division of the voestalpine Group achieved a total sales volume during 2013/14 of 2.4 billion and an operating result (EBITDA) of around 280 million euros. The division employs roughly 11,500 staff members and does business with almost all European car manufacturers. Within the Group, it constitutes the center of competence for highly refined sections, tubes and precision steel strip products and ready-to-install components made of pressed, stamped and roll-formed parts. Its combination of material expertise and processing competence is unparalleled throughout the industry, and its global presence makes the division the preferred partner to customers who are looking for innovativeness and quality.

The voestalpine Group is a steel-based technology and capital goods group that operates worldwide. With around 500 Group companies and locations in more than 50 countries and on all five continents, the Group has been listed on the Vienna Stock Exchange since 1995. With its top-quality products, the Group is one of the leading partners to the automotive and consumer goods industries in Europe and to the oil and gas industries worldwide. The voestalpine Group is also the world market leader in turnout technology, special rails, tool steel, and special sections. In the business year 2013/14, the voestalpine Group reported revenue of EUR 11.2 billion and an operating result (EBITDA) of EUR 1.4 billion; it had around 48,100 employees worldwide.