The electric car is on the horizon – but who will drive it? 3 minutes spent reading
Mobility

The electric car is on the horizon – but who will drive it?

The electric drive that should replace the internal combustion engine is igniting a hot debate. But there is only one reason to fear the electric car: the possibility that those of us in Europe might not play a role in its development and production. Timo Völker feels that for the moment, fear is ungrounded.

At the beginning of the upcoming decade, a carbon regime will take effect. It will give automotive manufacturers no other choice than to electrify their drives to a large extent (depending on the carbon footprint), and also to add one or two electric vehicles to their portfolio. It doesn’t matter if you agree or not – it’s a foregone conclusion. 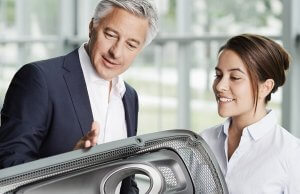 In no way does this mean that we will soon be saying goodbye to the combustion engine. France and England have done no more than declare that as of 2040 they no longer want to allow pure gasoline or diesel vehicles (all types of hybrids are expressly welcome). This statement sounds good, but is only empty words since by then the combustion engine playing solo in the drive train—see above – will long have been abolished.

While online forums are still bitterly debating the pros and cons of the electric car, it would be better to start looking at the real questions. In the future, how can we in Europe play a role in the e-vehicle similar to the one we have played for decades in conventionally powered vehicles?

It is true that China is the largest market for e-vehicles (especially because political leadership is promoting this technology). It is also true that cell production is currently in Asian hands.

However, 99% of the consumers in the USA and Europe prefer not to drive an electric car because it does not (yet) meet their requirements. The world still needs to be won over. With all types of electric vehicles that will actually be bought in large volumes. We are much better prepared for this campaign than many believe.

Well-known players in today’s automotive business have long rolled out the new business field. Best example: voestalpine delivers glued stacks of highest quality electrical strip grades (think compacore) such as needed to produce high-performance electric motors. The Group’s lightweight technologies will be needed even more in the future to increase coverage. Next year, at Magna in Graz, Jaguar will start up series production of the E-Pace, the first true Tesla challenger on the market. At the other end of the size scale, Kreisel, the small engineering company in Upper Austria, is astounding experts with its revolutionary battery technology.

The electric vehicle is not a question of world view, but of competition. When it comes to anything on four wheels, Europe has done fairly well in the last decades. Cars in the future will still have to be desirable, whether they drive on electricity or on trash and banana skins like the time-traveling DeLorean in “Back to the Future”. Only the momentary shock of something changing now needs to be slowly overcome.