David Croft, well-known Formula 1 expert and commentator for Sky Sports F1 UK, gives us a glimpse into the racing scene and what awaits us at the Austrian Grand Prix 2017 in Spielberg. 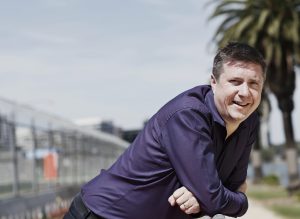 This weekend we’re all in for a treat. Well, we are if, like Tom Cruise in “Top Gun”, we ‘feel the need, the need for speed!’ Because in 2017, Formula 1 has gotten a whole lot faster.

The cars are wider. And more crucially, the rear diffuser is wider. This makes it more powerful, helping to increase downforce—the magical mystery suction that keeps the cars on the road and not flying through the air.

The rear wing is wider, and shorter. The width of the cars has increased overall. And as for the tires, guess what? You’ve got it. They are much wider—8 cm wider at the rear and 6 cm wider at the front, giving more contact with the asphalt, more grip as a result and enabling the cars to go much faster through the corners.

The top speeds on the straights have gotten a little slower due to the increase in drag that comes with more downforce. But hey, this isn’t drag racing and you’ll see the effects in Spielberg as the cars plunge from Turn 3, snaking their way downhill and eventually reaching the final two turns where the drivers will ‘feel the force’, quite literally, from the extra G forces they now have to contend with. I can’t wait to see the action at those two turns. It’s going to be incredible.

The aim was to achieve significantly faster lap times, but keep the same 1.6 liter, V6 hybrid engine. An engine that produces more horsepower than the old V10s we ran up to 2005 and also more than the V8 engines that ran from 2006 to 2013. Even if you take into account the KERS boost, these current hybrids still produce more power. Around 10% more power, which is a stunning achievement when you stop and think about it.

Amidst all the cries for more noise, more noise—don’t get me wrong I miss the sound of the old engines–shouldn’t we also be jumping up and down in celebration of what these current power units can achieve? The energy created by the ERS system alone is enough to power a family sedan. The fact that they propelled drivers to speeds of 371 km/h in Baku last year, for example, should also raise an eyebrow or two in admiration. 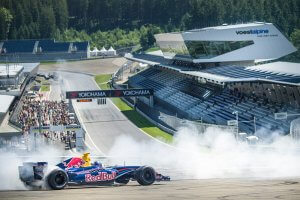 The fact that the cars are heavier, use less fuel, and are setting lap records in 2017 should also be a cause for celebration. Sadly, their sound, expense, and in some cases their reliability—Honda in particular—has rather undermined the positive impact of the new PUs. That said, the fact that some of these power units are now producing near to, if not slightly over 1000 BHP, is a brilliant engineering feat. And it should help us all drive hybrids that don’t have the acceleration of a snail in the future. Apparently, when snails wanted to go faster, they once took off their shells. But it only made them sluggish I’m told!

Okay, I’ll stop with the jokes. Back to the serious business of the Austrian Grand Prix. On paper, it should be another close battle between Mercedes and Ferrari for the win, with Red Bull competing for the minor podium spots on a track that might bear their name, but hasn’t brought them much luck in the last couple of years.

After their improved showing in Baku, Force India and Williams should be set for another decent scrap in the Top 10, while McLaren can probably prepare for another weekend of penalties, especially if they are going to run the new upgrade engine unit.

The battle between Mercedes and Ferrari has breathed new life into the Championship this year, with both teams producing very different cars—both of which are more than capable of winning the title.

Mercedes has a car that energizes its tires more quickly, giving them instant high peak grip. It also has a better one-lap pace, partly due to the benefits of the extra boost from the engine over the short term.

On race day though, that high peak grip becomes something of a liability since the Mercedes tends to take too much life too quickly out of its tires, while the Ferrari, a more compliant car, can keep its tires in better shape. The difference in engine power over a small period also evaporates, allowing the Ferrari to bide its time and pick the moment to push before emerging ahead in the latter stages after the pit stops.

Behind the scenes, the designers have been working hard to produce new upgrades that give a little more downforce than was needed in Baku last time out, but still minimize the drag effect on the fast straights. There’s no magic trick in 2017, no one upgrade that will instantly propel your car to the front of the grid. Instead it’s a combination of different areas, all coming together to produce lower lap times.

So look out for subtle changes to the front wing elements, new bargeboards on the side of the car and extra work around the T-wing, which looks ugly but trust me helps keep the car stuck to the track. All the changes are aimed at controlling the flow of air and putting it exactly where the teams need it for the drivers to apply just a little more throttle and go that little bit faster.

We’ve had the biggest set of regulation changes for the aerodynamicists to get their drawing pencils stuck into for many a year. And the results have been hugely impressive so far. So let’s see what this weekend brings.