Outlook 2018: An automotive year like no other 3 minutes spent reading
Mobility

2018 will see the booming SUV market collide at high speed with those (fully electric) cars which are expected to take us into the automotive future. Or will these opposites find common ground? An outlook for the automotive trends of 2018 by Timo Völker.

2018 will be a year for car enthusiasts, featuring an avalanche of premieres. Almost all the German manufacturers are updating their key models as well as introducing completely new ones. This is the result of more flexible platforms and larger construction modules which allow today’s factories to turn out a range of derivatives at an acceptable cost.

This is what the market demands: in the premium sector, in particular, no niche is too small—see the SUV coupés, the latest thing since the arrival of the BMW X6.

Consumers lust for change, and this is the key factor behind the SUV boom in Europe. There’s a desire for features which combine the adventurous and daring with equally high levels of perceived safety.

Manufacturers are happy to respond, turning out one robustly paneled and raised version after another. It’s a tough time for the traditional formats, limousines, and vans.

But what of CO2 limits, environmental and climate protection? Not exactly what SUVs embody. That’s why it’s high time to consider lightweight construction and push for alternative drive systems.

BMW set off down its own particular path at an early stage with its electric i3 and the plug-in hybrid i8. But it didn’t go far; the carbon fiber chassis may be lightweight, but it’s not freely scalable in production, making it too expensive. Buyers are also more hesitant than perhaps would be expected when it comes to completely new outward appearances.

Consequently, BMW is focusing on a production future in which alternative and conventional models roll off the production lines side by side, just as the market demands. The other manufacturers have also made arrangements for introducing alternative drives to their mass assembly lines with as little additional expenditure as possible. This is the only way to ensure that fully or partly electric models will be on the market by the early 2020s, and sold in large numbers. 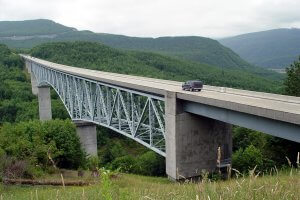 Lightweight construction must be achieved without the use of carbon fiber. The future for large volume series, in particular, lies in the intelligent use of lightweight, high-strength steel because, as the batteries themselves offer little room to maneuver, it is chassis weights which need to be reduced.

Developments in increasing energy density are being made, of course, but range fundamentally relies on sufficient levels of storage capacity—not even Tesla has magic tricks up its sleeve here. Using a purely electric drive, 70 to 100 kWh and above is required to cover a range of 500 kilometers. That’s up to three-quarters of a ton in vehicle weight for the batteries alone.

So it’s clear that several manufacturers will start producing electric SUVs in the coming year, because it’s easier to build heavy batteries into larger and higher vehicles. 2018 will see a few fully-electric prestige models, but almost none will weigh less than two tons, and they’ll be outside the price range for the average buyer.

And we’ll also have to wait a while for Tesla’s model 3. As Tesla CEO Elon Musk himself says, the Californian manufacturer is “going through production hell”.

What happened? It was very simple: the production team lacked expertise in welding steel. Steel? Yes. The model 3 needs to be much less expensive than the model S which is made from aluminum (bonded and riveted) which means steel is the only option.

In short, creating miracles isn’t as easy is it looks.

The future of autonomous driving

The other major automotive trend is taking place in the increasingly automated cockpit. Effectively, robotic cars have long since become reality: it started out modestly with cruise control decades ago, and has led to the use of cameras, radar and lasers to give the autonomous car eyes and ears. More about that soon.