The engineers from Kapfenberg work with their customers to develop revolutionary special forgings. As a result, BÖHLER Schmiedetechnik GmbH & Co KG is a strategic development partner for many customers.

“Previously, the customer defined the forged part, prepared the drawing, and then we implemented it. Today it’s different – we are involved in the process from the start,” explained Hans-Peter Freudenthaler, Head of Design Engineering at BÖHLER Schmiedetechnik GmbH & Co KG and one of the stars of the voestalpine image and brand campaign. The customer still generally selects the material, but when it comes to the design of the forged part, good ideas that lead to weight reduction are always welcome.

Concurrent engineering sets voestalpine apart from its competitors: The design engineers in Kapfenberg are involved early on in the process of constructing the prototype. This includes producing a design for the prototype with all of the data for dimensions, subsequent stresses, and the manufacturing process. “The earlier we contribute our ideas, the better. Then we can put all of our experience to use for the benefit of the customer,” Freudenthaler said. Once the prototype is approved, the next step is the simulation of the processes and then the design of the tools and components using state-of-the-art computer-aided design (CAD) and finite element method (FEM) simulation programs. 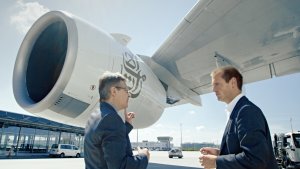 An important element in designing a new forged part is continuous communication and exchange of data with the customer. An aircraft is always the greatest common denominator, since it is generally sold to multiple airlines that each have differing requirements. There may therefore be repeated changes during the design process that naturally will also have an impact on the design engineering and forging process.

Time-to-market
- A new aircraft model requires about eight years from the concept design to its first flight.
- A new forging requires about one year for completion, about six months of which are needed for testing/approval by the customer.

The latest video from the voestalpine image and brand campaign focuses on engine mounts we produce for aircraft in Kapfenberg, Austria, and shows them being installed in the Airbus A380 of Emirates Airline. An ongoing blog series offers further insight and background information about the product, the areas of application and the market as well as about Hans Freudenthaler from Böhler Schmiedetechnik GmbH & Co KG, the star of the campaign.