Soaring above the market: the development of voestalpine Aerospace 5 minutes spent reading
Aerospace

Soaring above the market: the development of voestalpine Aerospace

For over three decades, voestalpine has been increasingly active in the Aerospace segment, drawing on the experience of its subsidiaries with an even longer history in the sector. 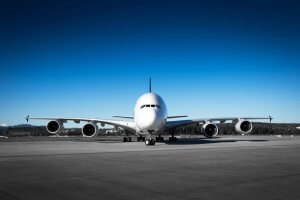 Market forecasts indicate that the aerospace business will continue to take off. An average annual growth rate of 3.5% is predicted through to the mid-2030s, paired with demand for over 38,000 new aircrafts until that date. voestalpine has increased its level of activity in the Aerospace segment over the past three decades. 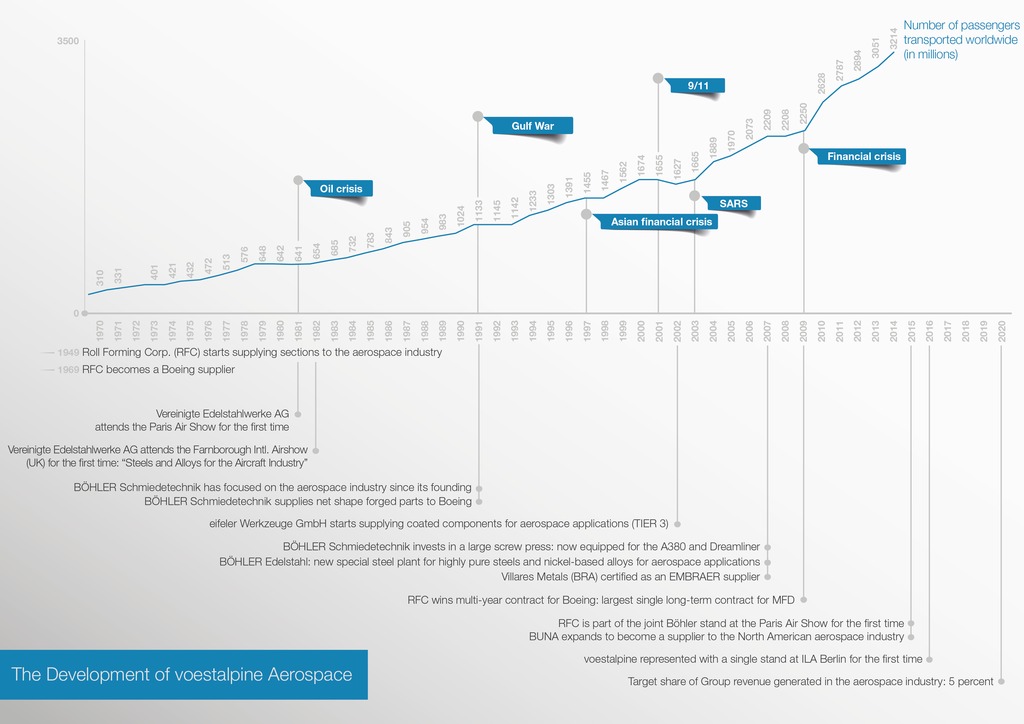 voestalpine acquisitions undertaken since its privatization have not only served to intelligently extend the value chain over the past decades. By incorporating companies with a long history in the sector, the Group has brought together material and market expertise, as well as technological and sales know-how, and this, in turn, has permanently altered the make-up of this market segment.

After acquiring the Roll Forming Corporation (RFC) in the United States in 2007, the Group’s aerospace history dated back to 1949, when RFC started supplying sections to the aerospace industry. The company’s close cooperation with aerospace giant Boeing would begin 20 years later.

The success is forged 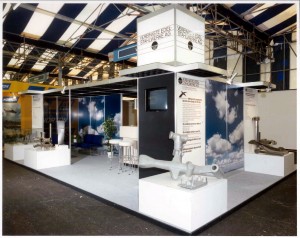 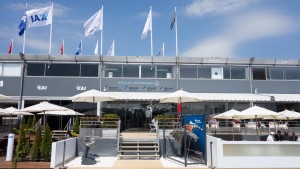 The Group’s Austrian production sites made their first tentative steps into the aerospace business in the 1980s through the Vereinigte Edelstahlwerke AG (VEW, BÖHLER from 1988 onwards); initially, revenue hovered below the EUR 10 million mark. However, investment in the most modern–and largest–forging technology stimulated greater confidence and market optimism. From this point onwards, the later voestalpine companies now consistently appeared at the most important aerospace trade fairs: at the International Air and Space Show (Paris Air Show) in Le Bourget since 1981, and the Farnborough International Air Show in the UK since 1982. Initially presenting mainly special steels for the aerospace industry, the product range was soon extended to include precision-forged parts in high-alloyed steels, nickel-based and titanium alloys, produced on the world’s largest screw press and for use in undercarriages, frames, and wings.

The BÖHLER companies profited from the aerospace boom of the mid-1990s through a combination of forging expertise and their own efforts. In Wichita, Head of Sales Herbert Puschnik convinced the management at Boeing to give preference to forged components “Made in Austria” rather than investing in this field themselves. Europe’s Airbus also finally became a customer, drawing on the benefits of voestalpine forging experience.

As a result, BÖHLER Schmiedetechnik has enjoyed disproportionate growth in the aerospace sector: Generating EUR 6 million, or around 7%, of the revenue in Austria’s aerospace industry in 1994, by 2004, the company had raised revenue to EUR 55 million, more than 13% of national revenue–a level it has maintained to this day. For example, with EUR 173 million in revenue, in 2014, BÖHLER in Kapfenberg again generated 13% of national revenue in the aerospace sector. In 2013/14, the voestalpine aerospace sector as a whole accounted for over a quarter of the revenue generated in Austria’s aerospace industry.

BÖHLER Edelstahl is also part of this success story as Europe’s second-largest supplier of special steels for the aerospace industry. Working closely with aircraft and jet engine manufacturers including Airbus, Boeing, and Rolls Royce, the voestalpine company has undertaken research into new materials for mega-projects including the Airbus A380 and Boeing’s Dreamliner.

The voestalpine takeover of Böhler-Uddeholm in 2007 brought a geographical expansion to production operations in the Aerospace segment. With the acquisition of Brazilian steel producer Villares, Latin America’s largest producer of high-alloyed steels for aviation and aerospace joined the voestalpine fold. Villares is the only certified supplier of high-alloyed steels and nickel-based alloys for the Brazilian aircraft manufacturer EMBRAER.

In the important North American market, Böhler-Uddeholm sales organizations provide the necessary contacts within the circle of aerospace suppliers. Since 2015, the special steel warehouses run by Bohler-Uddeholm North America, located in close proximity to American’s aircraft manufacturing hotspots in Southern California, Seattle, and Canada, have provided an excellent strategic starting point for further growth in the aerospace sector.

The obstacles to entering the aerospace industry are the certifications needed for materials, processes, and testing routines issued by government agencies and OEMs. The eifeler Werkzeuge GmbH, which joined the voestalpine Group in 2013, has been active in the aerospace industry (TIER 3) since 2002, when it was required to add coatings to a first batch of bearing rings produced by a roller bearing company whose products are used in aircraft turbines. Growing demand in the aerospace industry was accompanied by both growth in the number of customers and in the quality requirements. This required eifeler to submit itself to audits in order to become a certified aircraft supplier. Certification of eifeler hard coatings by both Nadcap (the US National Aerospace and Defense Contractors Accreditation Program) and TÜV (the German Technical Inspection Association), as well as other renowned turbine manufacturers including Rolls Royce, GE, and Pratt & Whitney, is smoothing the company’s own takeoff in the aerospace industry. Titanium nitrate-coated components produced by eifeler for the ESA launch vehicle Ariane are even making their way into space.

During the business year 2015/16, the voestalpine Group generated revenue of EUR 350 million in the Aerospace segment. This should increase to at least EUR 500 million by 2020—an ambitious goal, but one which appears achievable in view of the successful dealings of the past years. For example, in 2009, sections specialist RFC continued its decades of success by concluding the Metal Forming Division’s largest single contract to date worth around EUR 95 million for laser-welded titanium structural components for the Boeing 787 Dreamliner. And at the Paris Air Show 2015, BÖHLER companies signed long-term contracts worth over EUR 70 million. Today, voestalpine materials are found in all current Airbus and Boeing aircraft models.