Digital development of components is the resource- and budget-friendly way to achieve the optimal component. Extremely resilient aircraft parts made from high-quality materials are therefore “pre-produced” on a computer. 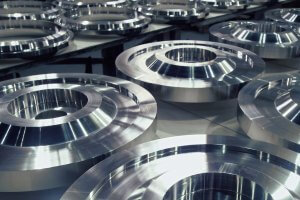 Developing new forged parts and planning their cost-effective production process in advance – this is how the use of computers makes it easier to reach decide for high-flying plans. Together with customers, developers at voestalpine BÖHLER Aerospace (former BÖHLER Schmiedetechnik GmbH) simulate aircraft components and their production before the first blow of the hammer. Even the properties of the planned parts and the results of the individual stages of production can be calculated in advance.

Production tailored to the customer’s needs

Trial and error is becoming a thing of the past. Today, if a customer needs a defined material structure and mechanical properties with extremely tight tolerances – in an engine disc, for instance – the possibilities are calculated in advance using computer-aided design (CAD) programs. With the high manufacturing costs and long development times in the aerospace sector, lengthy trials with samples are not a good option. For this reason, voestalpine BÖHLER Aerospace, together with its customers, links special software applications. Using complex models developed in-house, local mechanical properties such as yield strength in forged parts can be predicted.

The flow of material in the tools during the forming process can be made visible in the simulations. This allows the developers to detect possible errors and to determine the forming forces. Depending on the material, the physical variables in individual forming steps can be analyzed during this so that process windows such as temperatures can later be precisely determined. The in-depth know-how of the voestalpine process engineers is apparent here, as in the preceding component optimization process, in the precise assessment of the individual influencing variables of materials and processes.
One example clearly demonstrates this advantage: Due to the tightly contoured design of a forged part in the pylon, it was also possible to modify the final product in such a way that a lighter finished component was ultimately used in the aircraft. The weight ratio of the finished part to the forged part was cut in half, from about 1:10 to 1:5.