Research project for the development of a very special industrial robot

The EU research project SPIRIT for developing programming-free robots in which voestalpine BÖHLER Aerospace is involved will come to an end in a few weeks—with interesting future prospects for crack testing in Kapfenberg.

Innovation has many names at voestalpine BÖHLER Aerospace. One of them is Robert Pöllinger. Since joining the voestalpine Group’s aerospace components manufacturer in Kapfenberg as project manager for innovative production and simulation processes, he has been juggling several innovation projects in parallel. Pöllinger only has to keep one of these balls in the air for a few more weeks: the EU research project SPIRIT headed by the research company PROFACTOR. voestalpine BÖHLER Aerospace has been involved in this project since the fall of 2018, together with other partner companies such as Austria’s FACC and Italy’s Fiat Research.

The mutual goal: to develop an industrial robot that can quickly and easily take on a wide variety of inspection tasks without any programming effort. For instance, crack inspections like those Pöllinger’s colleagues perform every day on the highly safety-relevant voestalpine Böhler forged aircraft parts. “Our contribution to SPIRIT lies in testing a practical application,” says Pöllinger, who joined voestalpine Böhler as a local project manager in October 2020. At that time things really got exciting for the Kapfenberg team. “That’s when we started having a robot equipped with appropriate sensor technology detect cracks in six selected components.” 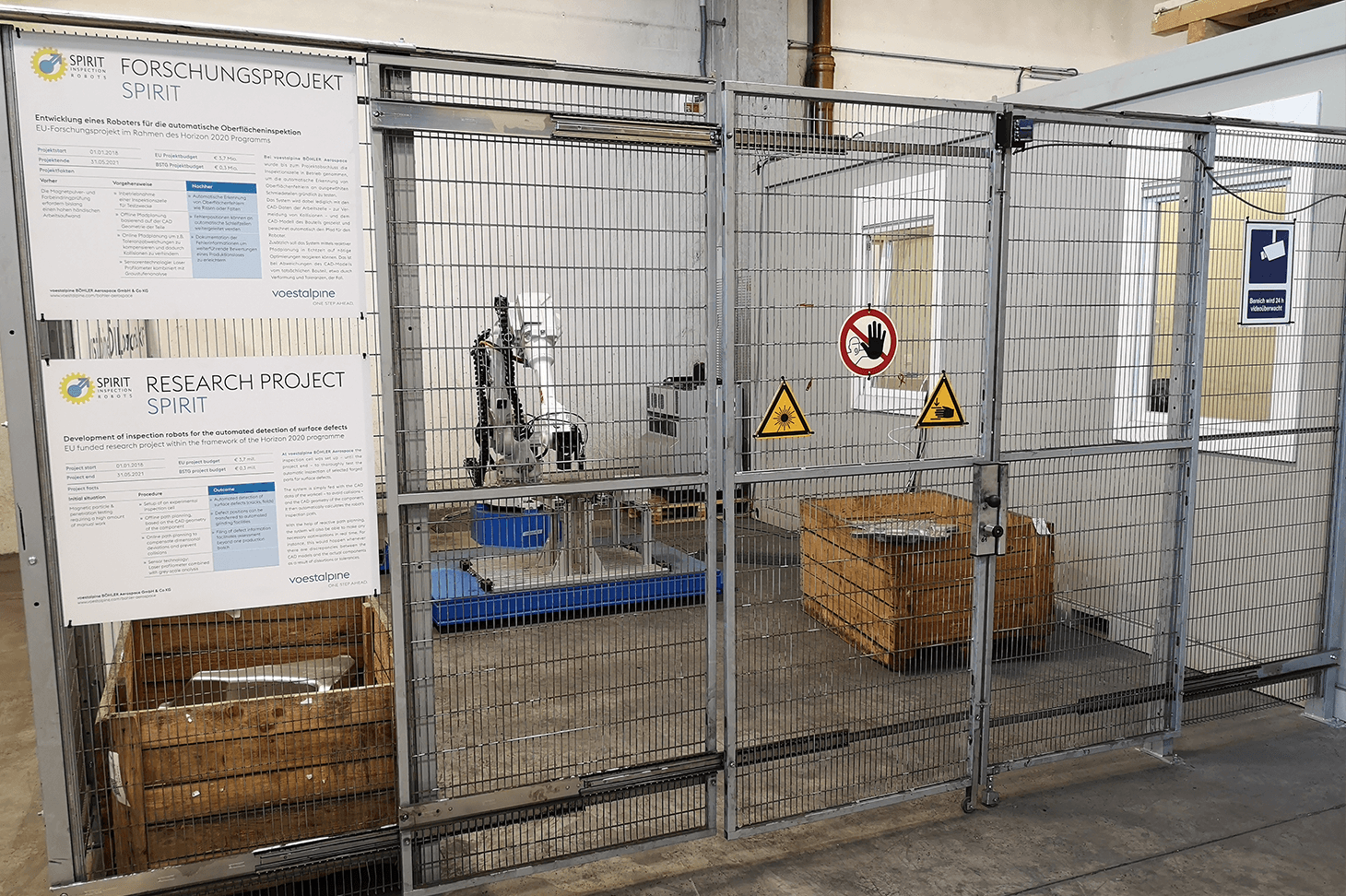 The decision was made to use laser profiling technology for testing. In this imaging process, the laser detects imperfections on the workpiece surface in a similar way to echo sounding. In principle, this worked quite well. As the mechanical engineer with professional experience in the automotive industry points out, “The software, sensors, and robots work together mostly without any problems.” However, shortly before the official end of the project, the Kapfenberg team is still struggling with the system’s teething problems: it detects not only cracks that actually exist, but also cracks that do not exist. And the robot has not yet fully learned the correct routes around the test objects.

“That’s why we can only inspect the workpieces in sections,” regrets Pöllinger. The main cause of the problem is the longstanding Corona pandemic, which led to an unplanned three-month project extension. It also prevented robotics specialists from the other partners from going to Kapfenberg in person. Making the best of the situation, Pöllinger took the robot control into his own hands—with video contact to the specialists, who could only help to a limited extent from a distance. “More than once, I had to stop the robot because it was on a collision course with the test object,” comments Pöllinger. 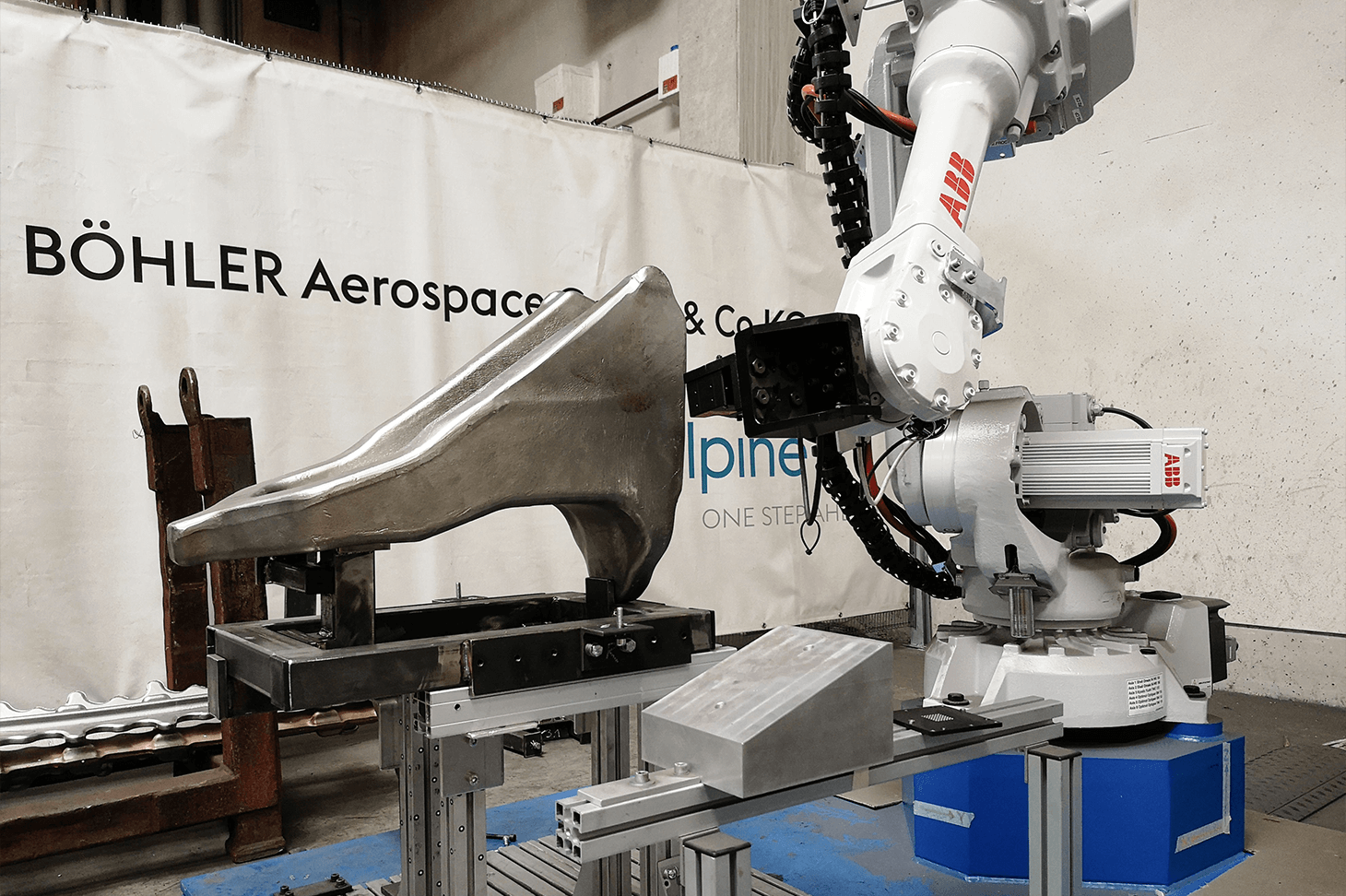 Finding and grinding in one go

After reviewing the final report in early summer, voestalpine BÖHLER Aerospace management will decide whether and how to proceed with the project. Pöllinger sees definite potential—provided the robot is able to learn how to properly plan the route. “We would also need to continue working on the sensor settings so that the sensors no longer report errors where there are none,” explains Robert Pöllinger.

In any case, the system offers the big plus of complete and millimeter-precise documentation of the cracks and where they were found. And of the technically feasible coupling of the robot with a grinding cell that immediately and automatically grinds away every crack. “That would greatly relieve my colleagues in production because manual grinding is very strenuous.”