Preparing for a technological leap

The pioneering H2FUTURE flagship project is taking shape. Together with VERBUND, Siemens, Austrian Power Grid, ECN and K1-MET, voestalpine is constructing the currently world's largest and most effective pilot plant for CO2-free production of green hydrogen in the steel industry. Construction at the voestalpine site in Linz officially began on April 16, 2018.

The hydrogen electrolyser is designed to be a technological milestone on the pathway to the energy transition, and to gradual decarbonization of the steel industry. In future, interdisciplinary teams will research and test the potential application of “green” hydrogen on an industrial scale in Linz, both in the various process stages of steel production and in the balancing energy market for the power grid. The core project team consists of around 10 people, supported by experts from all the project partners.

The origin of H2FUTURE

The idea for H2FUTURE was born during joint discussions between VERBUND and voestalpine in 2015. This cooperation was no accident: both companies have established themselves as benchmarks and drivers of innovation in terms of environmental and climate protection, as well as investigating the potential of “hydrogen” as an industrial gas and source of energy. In 2016 they finally decided to work together with Siemens to construct an electrolyser in Linz.

"At the core of the plant beats a high-tech heart from Siemens. Using green electrons we split water into its constituent parts, hydrogen and oxygen."

H2FUTURE has received EUR 18 million in funding, EUR 12 million of which comes from the European Commission’s FCH JU (Fuel Cells and Hydrogen Joint Undertaking). The Commission is funding H2FUTURE through to 2021 as part of the Horizon 2020 program, an ongoing European Commission EU funding program for research and innovation which runs to 2020.

"This is one of our flagship projects. The eyes of the world are focused on what's being developed here in Austria. H2FUTURE is a constructive partnership which plays a decisive role in the process of making industry “greener” while simultaneously using regenerative energies." 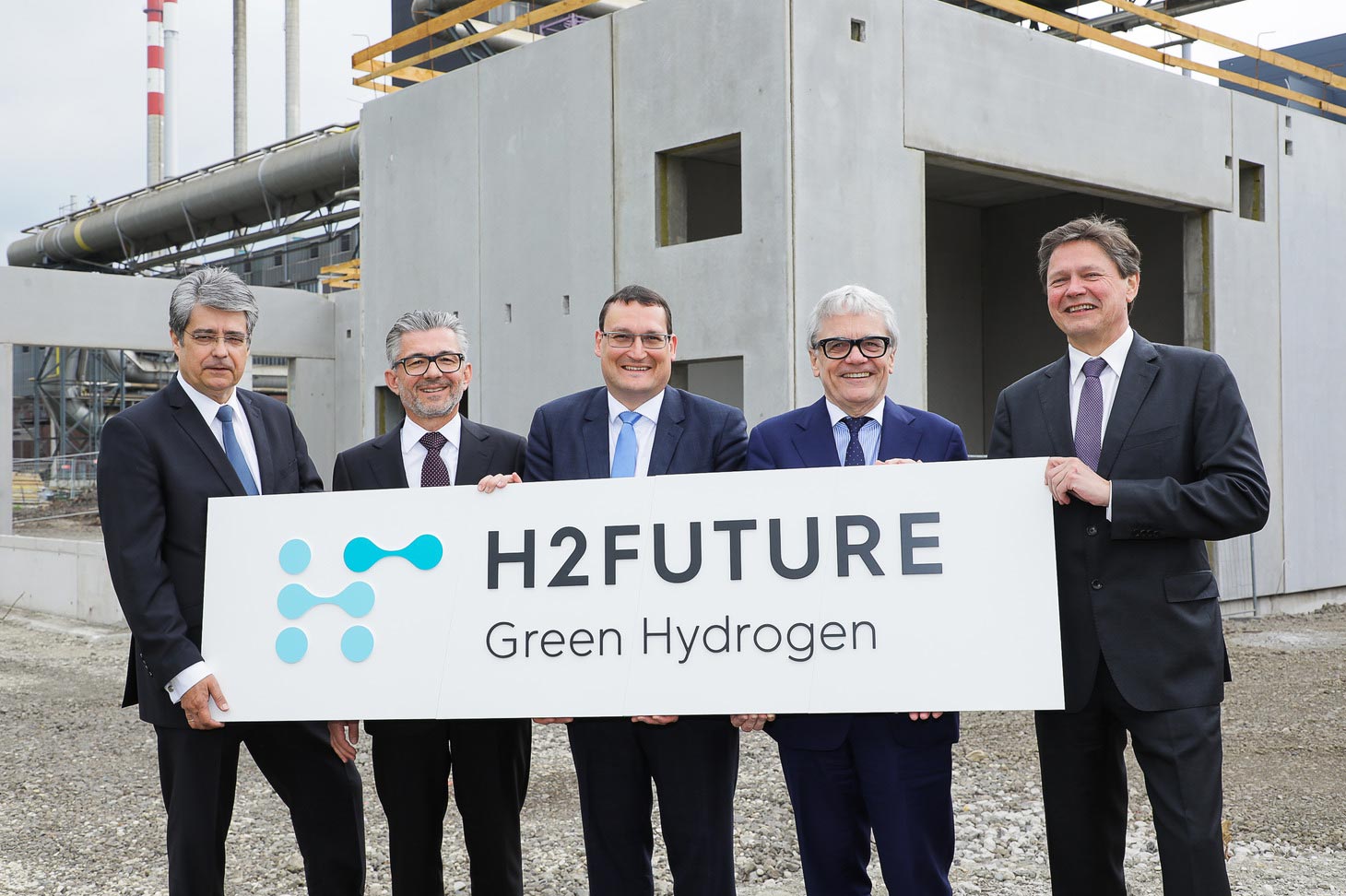 Within the framework of H2FUTURE, they are enabling the development of technologies which could be the basis for the energy transition and decarbonization of the steel industry (from left): Wolfgang Hesoun, Chairman of the Managing Board of Siemens AG Österreich (Siemens Austria); Herbert Eibensteiner, Member of the Management Board of voestalpine AG and Head of the Steel Division; Bart Biebuyck, Executive director, Fuel Cells and Hydrogen Joint Undertaking (FCH JU); Wolfgang Eder, Chairman of the Management Board of voestalpine AG; Wolfgang Anzengruber, CEO of VERBUND.

H2FUTURE gives the project partners the opportunity to once again demonstrate their innovative capacity and foresight. Together in Linz they will research and develop the use of hydrogen on an industrial scale across different industries and sectors.

"For us, “green” hydrogen is the perfect example of the sector coupling which is urgently required for decarbonizing power generation, industry, and transport."

Although it will take some time until the findings from H2FUTURE can be applied on an industrial scale, this is the first step towards breakthrough technologies for the energy transition and decarbonization.

"Construction of the new pilot plant for the production of CO2-free hydrogen is taking us a step further towards the long-term realization of a technology transformation in the steel industry. The goal is to research real breakthrough technologies which will be applicable on an industrial scale in the next couple of decades."

After the official launch of the project at the beginning of 2017, construction of the pilot facility at the voestalpine site in Linz has now accelerated. The foundations are in place and construction of the hall is currently underway. The core electrolysis components will be delivered during the summer, with the plant going live within a year. The start of the comprehensive two-year test program is planned for spring 2019.