Digitalization at the Buderus drop forge

No effort, no digitalization / Robotics in the drop forge at BUDERUS Edelstahl GmbH

Automation and digitalization aren’t one of processes you can set and forget. BUDERUS Edelstahl GmbH in Wetzlar, Germany, understands that you can’t have digitalization without continually learning about the processes.

“On the one hand, digitalization naturally brings increases in efficiency,” says Martin Dietze, Managing Director at BUDERUS Edelstahl, referring to the drop forge—his sphere of responsibility—which is primarily engaged in manufacturing parts for the commercial vehicles industry, as well as the oil & gas, and mechanical engineering industries. “On the other hand, our experience shows that using robots in the forging process improves product quality. Robots are extremely consistent and reliable, which results not only in increased parts precision, but also in an overall increase of process stability.” However, says Dietze, the effort required to achieve such stable processes should not be underestimated.

"We don’t buy ready-made solutions. We buy robots, and occasionally insource programming time, but everything else relies on our own know-how. And in the end, that’s what constitutes our manufacturing expertise and the added value for our customers." 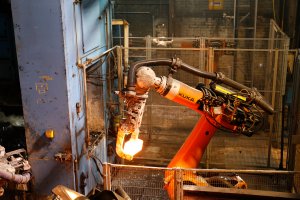 The drop forge isn’t an electronics-friendly environment. Here measuring instruments have to withstand the exigencies of lubricants, mill scale, heat, and dust. That demands consistent and thorough preventative robot maintenance.

Buderus Edelstahl in Wetzlar, Germany, has been building up experience in this field over the past several years. Today three of the six pressing lines in the drop forge are entirely operated by a network of robots, eliminating any manual handling of the parts which weigh anything from 2 to 200 kg. The first press on each of the remaining three lines has already been automated. A line is now operated by up to ten robots, with around ten being added each year. The first steps are also currently being undertaken to automate finishing over the next couple of years, says Dietze: “Our path towards digitalization is very clear. In future we want our processes to be fully automated, starting with the semi-finished blanks and right through to packing. However, that means permanent digital recording of all the properties of the components—properties that we alter several times during the production process. We aren’t that far yet. But we are investing every year to get there.”

"It makes no sense to use robots for manufacturing if you’re manually filling out working papers at the same time." 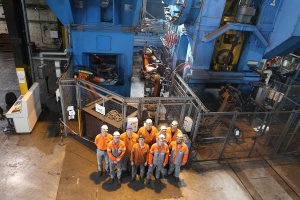 “If we already have automated processes, then it only makes sense to digitalize everything that supports these processes, i.e. by storing complete process parameters, recording and managing production data, and sending this data back to the machines whenever and however they need it.” This, however, demands employees who understand how the robots function, their requirements, and how they need to be managed. One and a half years ago a special area of the production hall was equipped exclusively for training employees how to work with the robots. “It’s not enough to install a robot; you have to create the operating programs, train it, service it, and make constant improvements. That’s a lot of work.”