Digitalization in IT: “Technologies are only part of the answer” 4 minutes spent reading
Working environments

Digitalization in IT: “Technologies are only part of the answer”

Digitalization in IT: We need open-minded employees

Digitalization is a huge topic at voestalpine. What do you think of when you hear the word “digitalization”?

The media often portrays digitalization as something futuristic and threatening that is about to descend upon us. But it should be seen like this: digitalization is taking place today, rather than sometime in the future. And we shouldn’t be frightened about it, instead we should see new technologies as an opportunity.

That’s right, and that’s exactly what we want, and need, to change in IT. We still think too much in terms of technologies, in quick solutions. But technologies are only part of the answer. What is important is that we understand our customers, in our case the voestalpine companies. The customers don’t want a drill, they want a hole. Here in IT we need to stop thinking in terms of drills.

We have to rethink IT, and ask more questions. First is always the question “Why?” We have to identify and understand the customer’s problems. Then our job is to think “What if?” That means to develop ideas, even “mad” ideas, and to come up with new ways of doing things. Only then do we come to the actual implementation, to the technological solution—“How do we achieve this?”

Yes, it is, and we’re on the right path. We are working more closely with our customers than we did a couple of years ago, exchanging ideas in workshops, relying on new methods such as design thinking, scrum, and lean startup. And our teams are also changing…

We are increasingly working in multidisciplinary teams because we need not only the IT experts who immediately have the right solution to hand, but also “IT laypeople”, if you want, who ask the right questions. We need people who are open-minded, curious, honest, and willing to experiment. And that’s something we consider when taking on new people. The digital transformation is not only changing our customers, it’s also changing us and how we approach tasks here in group-IT.

Change is always associated with skepticism—is the case for IT experts?

We have only just started out on this path, but we are progressing well. Our people have long known that the times in which solutions were thought up in isolation are long gone. We can’t solve the complex challenges of digitalization on our own. That’s why we are increasingly looking to cooperate with universities, external partners, and start-ups. We’re creating new networks.

How does this “opening up” fit in with our security mindset?

Previously it was our habit to guard knowledge. We need to let go of this “encyclopedia mentality” because now it’s all about sharing knowledge and learning from one another. But of course security also involves ensuring our customers have seamless data security. This ambivalence is a major challenge, and one of which we are aware.

What are the major challenges you still see for IT?

The IT landscapes we are responsible for are getting increasingly complex. There are ever more systems, platforms, and apps: the puzzle gets larger and the pieces smaller. And technology half-lives are getting ever shorter. The growth in the number of new solutions isn’t linear, it’s exponential. It’s not easy to maintain an overview in this context, but with the right attitude we will manage this too. What is important is how we cooperate and interact with one another: instead of saying “Yes, but”, we are now more often saying, “Yes, and”.

"The digital transformation is not only changing our customers, it’s also changing us." 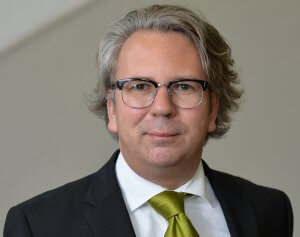 Ferdinand Grah has been with voestalpine group-IT since 2008 and his current roles include Lead Consultant Digitalization. He has previously advised and supported major companies including Porsche and IBM in the fields of digitalization, innovation management, and creative leadership.