Race in Rome: starting signal for the “voestalpine European Races”

Season five of the ABB FIA Formula E Championship begins its European tour, and with it the start of the “voestalpine European Races”. The premiere of this race series hits the streets in Rome, on Saturday, April 13. Motorsport-mad Italians may not have a true “local hero”– a driver with an Italian team–competing around the 21 turns per lap on the Circuito Cittadino dell'EUR, but there are still Italians in the game.

The Circuito Cittadino dell’EUR is located in the south of the city and has 21 turns. At 2.87 km in length, this is one of the longest circuits in the calendar. In 2018 around 45,000 people packed the stands to watch the first Formula E race held in Italy.

The drivers start at the Piazza G. Marconi before going into a 180° hairpin. After a right/left combination followed by a short straight, there comes a long-drawn-out left, a double left passage, and then another long straight which is perfect for overtaking. After another left bend and a small chicane, the drivers head back to the start/finishing line. The pit lane runs alongside the Palazzo dei Congressi. Top speed on the circuit: this season will probably around 200 km/h.

To date no Italian has succeeded in winning an E-Prix. And nor will there be a local driver competing this season. But thanks to his father, driver Edoardo Mortara (VENTURI Formula E Team) who drives for Switzerland and lives in Geneva also has Italian citizenship. And although his team-mate Felipe Massa is Brazilian, his grandparents have their origins in Cerignola, Apulia. And, particularly relevant for the Italians, he has driven 139 Formula One Grand Prix races for Ferrari, winning 11 times. 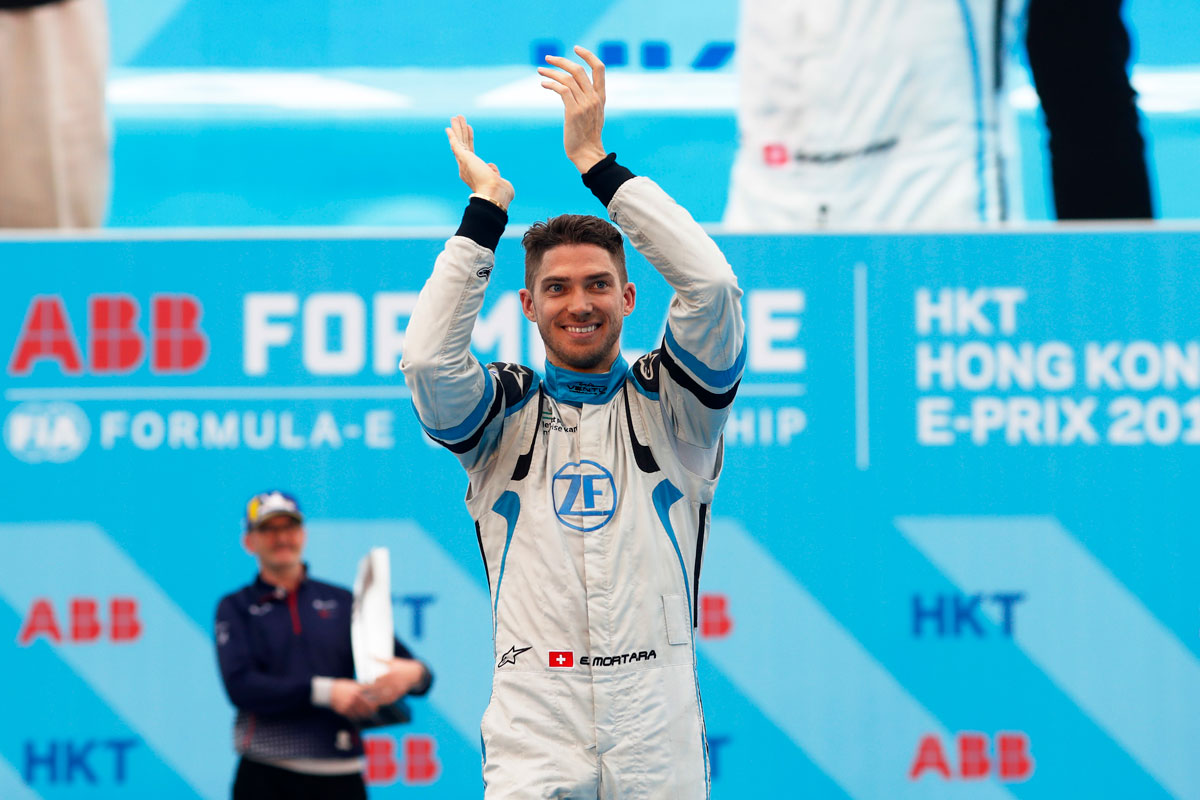 Edoardo Mortara: “For me, European races are home races!”

Edoardo Mortara, the winner of the E-Prix in Hong Kong, is a unique example of a global citizen who embodies the spirit of the “voestalpine European Races” like no other. For in certain respects every (!) race offers a “home advantage” for the 32-year-old who lives in Geneva and has successfully graduated in Business Administration: Mortara holds Italian and Swiss citizenship, formerly carried a French passport, his team is based in Monte Carlo, and he has recently spent seven years “working” in Germany as a test driver for Audi and Mercedes in the DTM. In an interview Mortara speaks about the rise of the Monegasque team, and why it’s often better to have big problems rather than small ones.

Your victory in Hong Kong was proof that in Formula E it’s not just the large works teams that can win. How proud does it make you when your small team beats the big boys?

Edoardo Mortara: Very! Because it’s all about the quality of the people involved. And we’ve put together an excellent team. They all do an outstanding job. You should see how they work! Sometimes they go home at midnight, and are back again at six in the morning. They often work at weekends and put in extra hours. Without moaning or complaining. These people are simply great, and that’s simply inspiring! And the successes naturally spur you on all the more. That’s what I enjoy.

Although the season start was a difficult one for your team.

We’ve made significant enhancements to our car. We correctly analyzed and understood the problems we had in the first two races. And they were major. But you know, it’s much easier to solve big problems than small ones. When they’re small, it’s often the fine adjustments which have you tearing your hair out. But the bigger your problems, the bigger the steps you can take.

Was the success unexpected?

Testing showed us that we’d put together a very respectable package. For me, our car certainly ranks among the top 10. And when we have a really good weekend and the others make mistakes, then there’s a place for us on the podium. Or for even more, as we demonstrated in Hong Kong.

You have something that’s sadly rare in motorsport–a female boss: Susie Wolff.

When Susie came, she immediately organized the structure of the entire team very well. She also displayed her feeling for the sport by getting absolute key figures on board for this Venturi project. She only arrived last year, and everyone can see the successes we’re now enjoying. I can only thank her, she’s made everyone better, and she keeps on pushing. You can see that she really deserves this job. She does it brilliantly, and I’m delighted for her!

Now we come to the “voestalpine European Races”. Almost a home tour for you.

(laughs). That’s true. I practically embody these European races! Rome is very close to my heart, and my father is Italian. I used to be French, I’m also Swiss, the team comes from Monaco, and I know Germany very well. I’m simply a true European.

And you’ve already had one home race this year, even before the series returned to Europe.

Yes, that’s right! My wife comes from Chile. That’s why Santiago was very special for me. It feels like home.