“Berlin, Berlin—we’re going to Berlin!” What for decades has been one of the most famous chants for German football fans, and is certain to be heard on Saturday in the hours before the German 2019 cup final, also applies for fans of the world’s most modern motorsport: the German capital is the venue for the BMW i Berlin E-Prix presented by CBMM niobium, the fourth and penultimate contest in this season’s voestalpine European Races. What awaits the drivers, and how André Lotterer, current leader in the battle for the 3D-printed voestalpine trophy, is preparing for this home race.

The voestalpine European Races 2019 are approaching the finishing straight—the fourth and therefore penultimate stop in Europe is Berlin, capital of a country which is home to many of the world’s major automobile manufacturers.
For three of the teams, this tenth race in the fifth season of the ABB FIA Formula E Championship is also a home race: Audi Sport ABT Schaeffler, BMW i Andretti Motorsport, and HWA RACELAB are all local heroes, as are drivers André Lotterer, Daniel Abt, Pascal Wehrlein, and Maximilian Günther. Of the four, Günther, the GEOX DRAGON driver with Austrian roots, has strongly qualified as a contender for this race by his performances to date, particularly in Paris. A first win for Wehrlein (MAHINDRA RACING) is long overdue. He most recently secured a solid fourth place in Monaco from his starting spot in the first row. And unbelievably, despite his many top placings, André Lotterer, too, has never won an E-Prix. This would be a good time to do so because the 38-year-old from Duisburg is right in the running to win the season’s most important titles, including the voestalpine European Races.

The tension is building: in Monaco Jean-Éric Vergne (DS TECHEETAH) was the first (!) driver to win a second race this season. Consequently, the Frenchman is also leading the championship, with races in Berlin, Bern, and two races in New York still to go. Vergne is ahead of his team colleague and friend Lotterer, while in the voestalpine European Races rankings the opposite is true—here the German is in the lead over Vergne who shares second place with Mitch Evans (Panasonic Jaguar Racing) and Robin Frijns (Envision Virgin Racing). Oliver Rowland is lying in wait in third place. 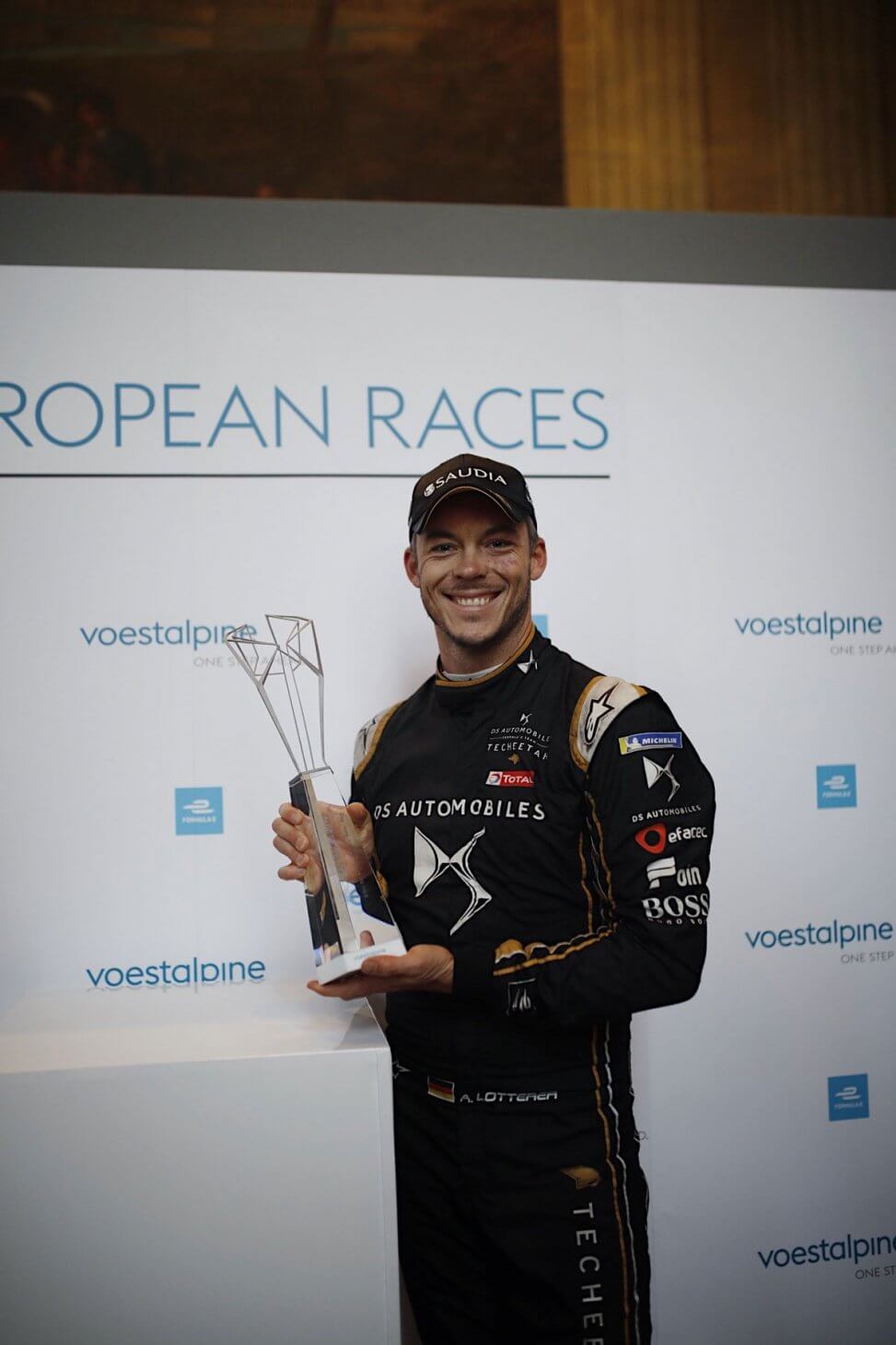 In an interview André Lotterer, the leading driver in the voestalpine European Races, tells us what these title fights means to him.

ANDRE LOTTERER: „A wonderful feeling! After my second place in Paris, I got to hold the trophy for a few moments—it’s incredible. And now I’m coming to my home race in Berlin as the leading driver. My goal is obviously to end up as the first winner in the history of the voestalpine European Races..“

There was a major change to your team prior to the start of the season. Previously, the team sourced its drives as a customer of Renault, but now TECHEETAH has formed a works team with DS Automobiles who now supply the drive systems. What changes has this brought?

ANDRE LOTTERER: „Many! It makes a huge difference after having leased a Renault motor last season. The team has grown, and most importantly we now have the 15 manufacturer’s test days. The experience Jean-Éric Vergne and I have gained in motorsport has also helped. A huge part of preparing for Formula E is ensuring the mapping works, and that the car does precisely what you want it to. Plus we have more resources and can develop things faster. I’m convinced that having your own manufacturer in Formula E is absolutely the right way to go.“

You have vast experience, have won the Le Mans, were WEC World Champion, have raced in other series, and are also a title holder and star in Japan. How do you see the future of Formula E?

ANDRE LOTTERER: „It’s bright. Everyone drives the same car which makes the aerodynamics largely irrelevant. The result is a great show. That’s where it differs from other series. And there’ll be more innovations. I find the idea of fast charging the batteries very interesting. It’s also relevant for the automotive industry, but we just have to be careful that the battery costs don’t shoot up too much.“

The BMW i Berlin E-Prix presented by CBMM Niobium, the fourth of the voestalpine European Races, starts on Saturday, May 25, 2019, at 13:00. ORF eins, Eurosport 1, and ARD will all be broadcasting live.