The ABB FIA Formula E Championship is on its way to Berlin and the grounds of Tempelhof airport where the fourth of the voestalpine European Races, and tenth race in the 2018/19 season, will take place on May 25. The visions of the German premium manufacturers in Formula E are also soaring: starting next season, works teams from all the four major German premium marques will be competing against one another in a top-tier race series for the first time.

Behind the scenes at the Formula E race in Berlin this coming weekend (May 25, 2019), the competition between BMW, Audi (already racing), Mercedes (indirectly involved), and Porsche (in the test phase) will be palpable for the first time. It will be a high caliber match to determine the future of mobility and the role of the individual corporations in this race of the giants—here is an overview.

Audi: the pioneer from Ingolstadt 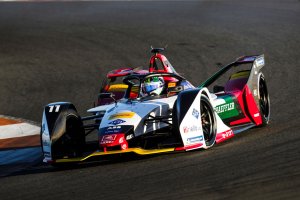 On May 15, it was precisely five years since the first Formula E race car was presented, as well as five years since the ABT team first introduced itself to the public. Right from the start the team featured drivers Daniel Abt and Lucas di Grassi, evidence of the impressive continuity in what is now known as the Audi Sport ABT Schaeffler works team. Both drivers have taken part in all the Formula E races to date, always as team colleagues, and always competing for one and the same team. Last season they won the team championship, with di Grassi winning the driver rankings the year before. The team boss is also a legend: Allan McNish, a Scot and three-time winner of the 24-hour Le Mans. McNish, who lives in Monaco and is one of Alex Wurz’s closest friends, is extremely impressed by how the ABB FIA Formula E Championship has developed. It’s a championship in which customer teams also have a chance: Envision Virgin Racing, using an Audi powertrain, has been the only team this year to date in which both drivers have managed to win a race. And both Robin Frijns (part of the Audi driving team as a DTM test driver in his “other life”) and Sam Bird have a chance of winning the championship.

BMW: the motor manufacturer moving into the future

Starting this season, BMW is now officially competing in Formula E with its own works team. It was previously involved as the technical partner to the American Andretti team. And the team, now known as BMW i Andretti Motorsport, couldn’t have got off to a better start: Antonio Félix da Costa won the very first race of the series in Riyadh, immediately advancing to become the championship leader and favorite. However, the Portuguese driver’s season has been rather stop and go since then, with podium placings, crashes (with team colleague Sims in Marrakesh), and most recently a disqualification in Monaco (energy consumption too high). But he still has a chance of winning the championship. The second driver in the team is Alexander Sims, to date the season’s most unlucky competitor. He has been involved in more crashes than any other driver, almost all of them not his fault. 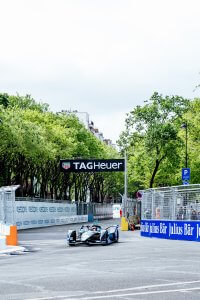 Formula One World Champion Mercedes started this season under a “pseudonym”: long-term partner HWA has been involved in Formula E since season 5, racing as HWA RACELAB. From season 6 onwards the team will compete as the Mercedes EQ Formula E team. Team boss Toto Wolff has, as you’d expect, plenty of respect for this completely new task. HWA RACELAB (lead by Ulrich Fritz) secured its first podium place in Rome, with Stoffel Vandoorne in the cockpit, but the Swabian team still trails in the team rankings. Although this will quickly change: the second driver is the reigning DTM champion, Englishman Gary Paffett.

Like its neighbor Mercedes, the team boss at Porsche will also be an Austrian: Fritz Enzinger, who led Porsche to three LMP1 World Championship titles and a series of Le Mans wins. One of the drivers in the long-distance team is a fixed starter for the ABB FIA Formula E Championship 2019/2020: Swiss driver Neel Jani. The first shakedown took place in Weissach in April, and now the test program is fully underway. In contrast to Mercedes, Porsche will be racing in the series under its own name from the start. “It’s a milestone for Formula E that both Porsche and Mercedes have both decided to join us,” says Alejandro Agag, the founder & CEO of the series. It is one of the reasons why experts assume that the series will be awarded official FIA world championship status in just a few years. It is still undecided who will be the second driver in the Porsche Formula E team. The position is highly coveted. Brendon Hartley has already completed one test.