The solar collector for which the Belgian voestalpine Sadef supplied a specially designed substructure is not only sustainable, it is mobile. It had to be space-saving and weight-saving as well as easy to assemble, because the photovoltaic solution is primarily intended for use in remote areas.

There are many possible uses for reliable, mobile energy sources, even in the remotest places that have no connection to an existing or functioning network—from a field hospital in a disaster area to solutions that are only needed temporarily, such as open-air events. The SunBox wants to use solar modules to make that possible. What is special is that everything needed for the small, mobile photovoltaic power plant is stored in a 20-foot shipping container—the solar panels themselves, all the profiles and fastenings for the substructure, all the tools, ladders, cabling and other equipment. The container also automatically solves the question of transport. It provides storage and serves as a foundation for the solar scaffold assembled on site.

It only takes two people less than a day to get the SunBox up and running. But the simple, yet ingenious idea would not have been possible without the innovative, robust system from Belgian voestalpine Sadef. The system not only uses far fewer vertical supports than conventional mounting and assembly systems for solar modules, it also enables fitters to save time and material. Solar modules can be inserted quickly and easily into the prefabricated profiles—clamps are already integrated and no longer have to be attached separately.

The system was designed so that only three different screws and nuts are required to assemble the coated steel frame. Managing Director Peter Verbrugge explains, “We developed a structure that fits comfortably in and on such a container. The container is loaded in Europe and simply unpacked in Africa. The SunBox was first used in spring 2018 by a telecommunications company to bring mobile telephony to less developed areas of Africa. voestalpine Sadef has already delivered the first ten prototypes. Negotiations on further deliveries will take place in the coming months. Other planned future applications of the mobile solar collector include schools and hospitals. 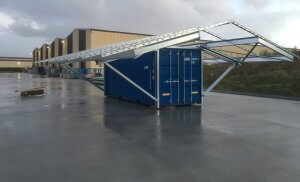 The system can be shipped in a transportable container to the most
remote locations and then assembled. It is loaded in Europe … 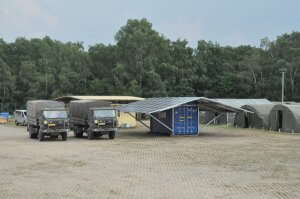 … and unpacked in places like here in Nairobi, Kenya.