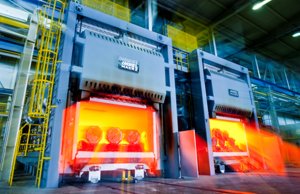 In the forge at Böhler Edelstahl in Kapfenberg, the two old shuttle kilns have been replaced with regenerative burner systems. Savings: 11 GWh/year

Around two years ago, a structured program was introduced for all major production companies in the Special Steel Division, to set concrete targets for saving energy. The target is to permanently reduce annual energy consumption in each company by two percent, year on year. The first year has now been completed. During the 2013/14 business year, the Special Steel Division has saved over 100,000,000 KWh (or 100 GWh).

In a first step on the way to greater energy efficiency, a clear structure for exchange, cooperation, and controlling was created in 2012 in an effort to save energy. At its head stands the divisional coordinator. One person responsible for the project has been nominated at each of the larger production companies in the Special Steel Division (Böhler Edelstahl, Böhler Profil, Böhler Bleche, Böhler Schmiedetechnik, Buderus Edelstahl, Uddeholm, and Villares Metals). This person has the overview of the initiatives being undertaken in their own company, and is the contact person for the divisional coordinator.

The interest and creativity of all employees throughout the Special Steel Division was, and is, required to achieve this ambitious target. In the end, work is being, and will be, carried out by means of 85 projects.

Thanks to innovative ideas and excellent cooperation within the newly created organization structure, the target of 63 fewer GWh was not only achieved, but impressively exceeded. The 85 projects have resulted in total energy savings of 100 GWh. An average household consumes around 4,200 KWh (kilowatt hours) of electricity each year. That means the Special Steel Division has saved the equivalent of the annual consumption of some 24,000 households.

Increasing efficiency and the associated reduction in energy consumption are beneficial for the environment, as well as bringing cost savings which have a positive impact on our competitiveness.