The Waterfall Swing at the Höhenrausch 2014

Interview with Mike O'Toole, founder of the Waterfall Swing from Dash 7 Design.

The Waterfall Swing lets riders swing through cascading water without getting wet. This project is one of the highlights of this year’s Höhenrausch exhibition in Linz. In an interview, founder Mike O’Toole from Dash 7 Design talks about the background behind the idea and the project challenges.

Can you tell us something about yourself and your company? 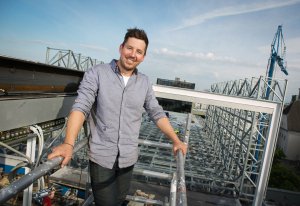 Well, I lead a group called Dash 7 Design. Dash 7 is a form of collaboration between artists and craftspeople. I work from an engineer’s standpoint and plan the scope of projects. Some of these projects are quite big, but we also try to do other stuff in our free time and try out new things. In an ideal world you get a project that is fun, cost-effective and something you want to do – such as the Waterfall Swing, the project we’re doing here.

What’s the Waterfall Swing project and how does it work? 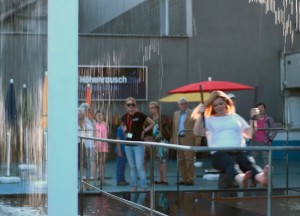 It’s an idea of ours, one we’ve been working on with friends over the years. I brought in a lot of people to help build something and we had an idea. It was created together with three friends, Andrew Ratcliff, Ian Charnas and Andrew Witte, and built by Dash 7 Design.

The Waterfall Swing allows riders to swing through cascading water without getting wet. Riders pass through openings in a waterfall, generated by precisely monitoring their path using axel-housed encoders, and creating the thrill of narrowly escaping obstacles.

When did you start the project?

It was about four years ago when we started, and it began as an experiment. Our initial budget was USD 1,200 and so we used all kinds of odd materials: scrap steel and some cheap parts. But it was a lot of fun actually getting it to work.

What was the initial idea behind the project?

Basically, the concept is born out of an interesting observation made about people and the way they use new devices. For example, when people stare at their smartphones when walking and then bump into things. Or people who drive their car into water, because their navigation device tells them to keep going straight. It is something that is really, really funny to watch, but at the same time a little bit scary.

So I got this kind of urgency to design a “device”, one which is fun but which also shows how we react when we lose control. And that is what the Waterfall Swing is about. When I kicked around ideas with Andrew Ratcliff, we knew this was something we wanted to see. You don’t have a button to switch it off. When someone pulls you back and gives you a pig push, you better hope that we got our maths right. (laughs)

What are the challenges of this project?

The biggest challenges are basically the variety of mediums and the scope of this project. I’m an engineer and can handle things like constructing the swing, making the frames and doing some of the conceptual work. But there are things that are entirely out of my scope, such as needing to make computer programs to control the software. And when the scale is this large, the project management becomes another aspect that I just can’t do by myself.

So we are three friends working on this project. This can also be a big challenge in itself. But when you get to work with your friends and you travel together, the reward is much greater. It’s a lot more fun.

Is it a challenge to be in this special location? 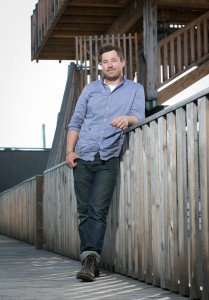 Being presented up high on a roof is very cool. It will be a great feeling to swing and see the entire city, especially at night.

And it has always been a dream to have an installation up for an entire season, because even when we tour in the States, or in recent tours through the Netherlands, we are exhibited for a week at most. So to have it up for five months and in such a great spot, especially next to the new voestalpine open space, is going to be pretty amazing.

How do you feel when you watch people using the swing?

The pleasure of watching people enjoy the ride is endless. We could sit there for a whole day and just watch everyone swinging. It is very rewarding to make something that gives people a new sensation.

And it doesn’t matter how old you are; there is something special about seeing the water falling only six millimeters from your head. Especially children, they just don’t care. We found that children and the elderly, people over 70 and 80, are both very careless, very whimsical, when they’re on the swing. Then everyone in between seems to have a different reaction – most people are unused to losing control.

What do you think of the commitment that a company like voestalpine makes to cultural projects?

I think it is amazing to marry these two things. I hope this is just the beginning, because it is great to see that amount of effort. Especially here, where the voestalpine open space has been built in only a few weeks, and during this short period the location gets a completely new feel and a completely new life.

What does steel mean to you?

Steel for me is a kind of constant – it’s always been there. It is also one of the hardest and most rewarding materials to work with as an artist. The thing that drew me into working with steel is its permanence. When you are working with steel you have to make a lot of very conscious decisions about how you want it to be. But after those have been made, it’s good and strong, and will probably be there forever. (laughs)

What is your vision or personal goal for your group?

Well, my goal is basically to live and work in the space between art and engineering. I would love to be an asset to the art world in a problem-solving way, and then also to spend part of my time being able to work on my own pieces.