The voestalpine open space high over Linz's rooftops was opened in 2014. In 2015 it will serve as a musical research station for artists and parrots. Martin Sturm in part two of the interview about the Höhenrausch 2015 and the partnership with voestalpine which extends beyond 2015.

The voestalpine open space opened a year ago: what was the reaction from visitors? 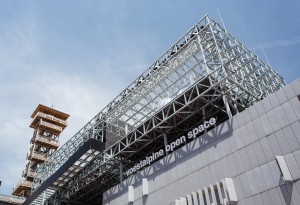 When people go up there, the space releases something in them, it creates a resonance. It’s hard to say what it is, but something happens there. You can confuse your ‘normal’ perceptive framework, at least for a moment.

A goal of the voestalpine open space and the Höhenrausch is to make art accessible to more people. Has that happened?

Oh yes! We have many visitors who would never, or only rarely, go to a museum. Here people can experience art in a context which they find pleasant, while strolling through, as if just wandering past. That’s an important contribution to culturalizing society.

The theme of the Höhenrausch 2015 is ‘The secret of birds’. And the voestalpine open space becomes an aviary… 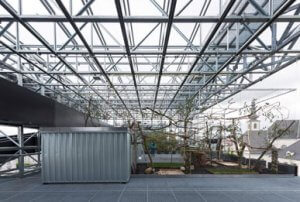 The OÖ Kulturquartier (OK) has been operating the Höhenrausch since 2009. In 2015 the theme of the art tour at lofty heights is birds. alien productions, metamusic, 2015

Twenty parrots will live here for six months. But it’s not about exhibiting the birds; we’re not a zoo. It’s about interaction: the artists are engaged in artistic behavioral research, and the visitors can watch this; it’s equally a performance and a laboratory. The artists build equipment that the birds use. Then it’s all about finding out which sounds the birds like, and which equipment they use most often.

What is your experience of the partnership with voestalpine?

There’s a strong connection, namely the firm and shared conviction that determining the future is a dynamic process. Whether you see that from an economic viewpoint, by developing new products, or from an artistic one, by creating new patterns of perception, it’s all the same. We both feel a sense of great curiosity and a desire to think about the future. We exchange ideas: about new spaces, new potentials, of creating space with steel, new perspectives on urban development. These shared mental spaces and attitudes have substance.

"We share with voestalpine the firm conviction that determining the future is a dynamic process."