voestalpine open space: a way of thinking about the future

The voestalpine open space, high over the rooftops of the city, was opened in 2014. This cultural and event space is also opening up new perspectives. Martin Sturm explains what they are in the first part of the interview. 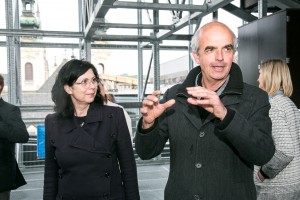 It’s a spatial model that can be adapted. Normally building structures are seen as something fixed, like a house. The voestalpine open space is a basic structure which can be constantly viewed and used in different ways, an attempt at creating structure within a three-dimensional space, in which I can move.

A space which is never finished?

That’s right. Like a chameleon, one which can change not only its color, but also its structure. People who come in here don’t know if they’re in a room or an open space; they’re exposed to the wind, to the light, and ask if the rain comes in. That’s not what you’d expect from a room. That causes feelings of disorientation, but this is very helpful!

Why is it helpful?

This disorientation, or even better, this ‘dis-orientation’, has a creative potential, it’s a positive psychological state for looking at things more openly. If you’re unsettled, you look at things in a different way and more carefully.

And that’s positive disorientation, because at the same time we’re fascinated. Then we’re also ready to step outside the limits of our perception, and then the irritation becomes an asset. Disorientation and fascination can be experienced simultaneously in the voestalpine open space. And it’s easier to think about the future in this state. It’s not about the space itself, but rather about the user’s disposition.

How is this potential to think about the future created?

Over the years we construct convictions and then live according to them. And we always find it difficult to accept something new. We increasingly categorize everything according to our convictions and lose our ability to assimilate. Art has the potential to break through this, not only mentally, but also physically. That’s especially the case with the voestalpine open space, which demands activity.

What type of activity?

You have to walk around the space, the views change constantly, there are an infinite number of ways of viewing, you feel exposed, the space is merciless, it makes demands – but it works. This diversity leaves much open and makes much possible. It makes demands not only of the visitor, but also of the artists. Art as seen from an ideal distance and an ideal viewpoint – that doesn’t work up here. You have to grapple with the space and not everyone is prepared to do so, that doesn’t always work. That’s complex, but thinking out the future is always complex.

"Disorientation and fascination can be experienced simultaneously in the voestalpine open space."