The ultimate in extreme aerobatics at the Red Bull Air Race

As light as possible, as durable as necessary – the basic formula for an aircraft that can be operated economically sounds pretty simple. After all, weight and fuel consumption are directly related. And the lighter the aircraft, the more freight or passengers it can transport. 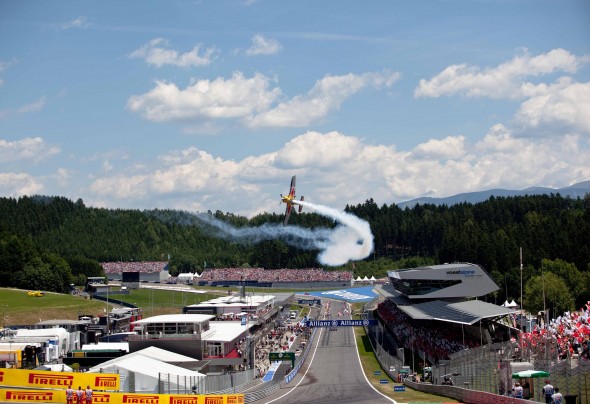 This makes extremely high-quality structural parts, like the engine mounts like those manufactured by voestalpine, indispensable for the production of large commercial aircraft – including in the pylons of the Airbus A380, a support mounted on the wing panels of the aircraft to which the engine is attached.

And one other aviation discipline also demands maximum stability with the fastest air maneuvers possible: the Red Bull Air Race 2016 with top speeds of up to 300 km/h (186.4 mph) at an altitude of only 15 meters (49.2 feet) above ground, the daredevil pilots have to be able to rely completely on their flying machines, which are constantly being pushed to their limits.

The light but high-strength steel tube frames of the Zivko Edge 540 aerobatic aircraft flown by most teams is therefore constructed with computer-aided optimizations and simulations. After all, the Air Race requires the ability to withstand acceleration forces of up to 10 G – twice as much as in Formula One racing!

The excitement is building for the Red Bull Air Race 2016 season, thanks to new pilots and modified regulations. New time evaluations are making the skills of the pilots and teams even more important. The next race takes place on April 23 and 24 in Spielberg, where the Air Race is making its third appearance. Special attention is being focused on Hannes Arch, a local hero and Air Race winner of 2008, who is looking to celebrate his first victory in front of the Alpine backdrop of his home.

Landing strip directly next to the voestalpine wing

Fans of the pilots can also get and extremely close-up view of the pilots and their aircraft in Spielberg: the landing strip for the highest-ranking Master Class is directly next to the voestalpine wing. And in addition to breathtaking aerial maneuvers, spectators can thrill to a packed program of surrounding events including stunt shows, the Flying Bulls, the Red Bull Skydive Team, show runs, airplane and helicopter exhibits and the reigning aerobatics world champion Aude Lemordant.

Incidentally, the Air Race is likely also the only race in the world where the boundaries of the course also involve enormous expertise in lightweight construction: the nylon material in the 25-meter-high (82.02 ft) pylons on the roughly 5-kilometer-long (3.10 miles) slalom course weigh just half as much as a piece of paper. For safety purposes, it tears immediately if a propeller aircraft should happen to touch one of the pylons.

Events at the Red Bull Ring
Other adrenaline-charged dates in Spielberg: the Truck Race Trophy from April 29 to May 1, the DTM from May 20 to 22 , the Formula One on July 2 and 3, and the MotoGP on August 14.
voestalpine.com