As well as the 20 Formula One drivers from 10 teams, there are also many others helping to make the Formula One race at the Red Bull Ring a special event. 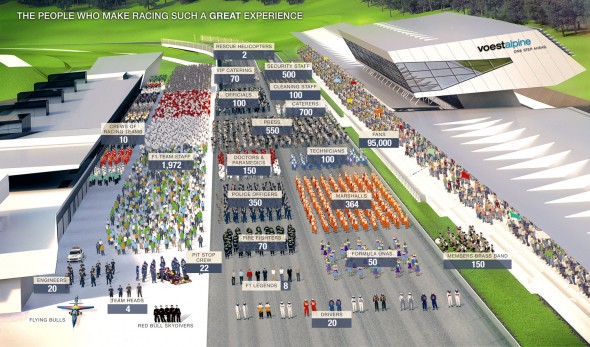 At any Formula One race the focus is primarily on the main players: the 20 drivers in the 10 Formula One racing teams. At the Austrian Grand Prix at the Red Bull Ring on June 21, 2015 they’ll be supported by 50 Formula Unas and around 95,000 fans.

Naturally, each Formula One team also has a large crew in the background, consisting of engineers, crew chief, technical director, team manager and many more. There will also be 1,972 Formula One employees in action over the race weekend, including logistics experts, medical personnel, and others.

An important role at the race is played by the pit stop crews, because during a pit stop every second counts. At just 1.923 seconds, Red Bull holds the pit stop tire change world record! Only the world’s best mechanics make it into the pit team. A total of 22 mechanics are ready and waiting in the box:

The pit lane is opened 30 minutes before the race begins. The tires have to be fitted 3 minutes before the reconnaissance lap. The engines are turned on 1 minute before the warm-up round, and all the mechanics must have left the start/finishing straight in front of the voestalpine wing 15 seconds beforehand.

The voestalpine wing as media center

The new voestalpine wing has not only been the architectural highlight of the Red Bull Ring since 2014, it also serves as the media center for around 550 press representatives from around the world. Footage of the racing will be broadcast in 185 countries.

These people, and many others, turn Formula One racing at the Red Bull Ring into a true experience!

Holds editorial responsibility for blog topics, is researching and writing articles. Her stories give insights into the world of the voestalpine Group.
All posts Contact
Environment