On May 24, voestalpine invited regional journalists and the online community for an information session and an Instawalk under the motto “Media meets voestalpine” at the voestalpine open space. 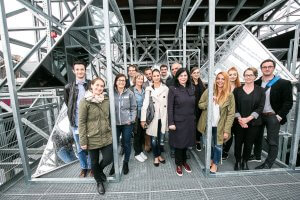 After the information session, Eva Schlegel, the artist who designed this year’s art installation in the voestalpine open space, took the guests on a guided tour through the labyrinth of mirror designed by her, alongside Martin Sturm, artistic director of the OÖ Kulturquartier. At first glance, the special arrangement of the mirrors hides one’s reflection, which is meant to counteract the common impulse to scrutinize one’s own appearance. Only when positioned at the right angle it is possible to see oneself in the mirrors.

In particular the bloggers and Instagrammers that were present used the opportunity to take pictures of the open space for their different online channels and to post them with the official hashtags #openspacelinz and #voestalpine.

High above the rooftop of the OÖ Kulturquartier in Linz a space for cultural experience, the voestalpine open space, was erected in 2014. Not only is the voestalpine Group the exclusive main sponsor of this project, but it also helped give the project structure and form with its own products. As in previous years, this cultural space, the “voestalpine open space”, once again acts as a setting for the Höhenrausch 2016.