Sommerkino in the voestalpine open space

Interview with Wolfgang Steininger, managing director and program director for Moviemento and City Kino, about the "Sommerkino" (open air cinema) in the new voestalpine open space in Linz, Austria.

Interview with Wolfgang Steininger, managing director and program director for Moviemento and City Kino, about the “Sommerkino” (open air cinema) in the new voestalpine open space in Linz, Austria.

"I've never seen anything like it before, and I can't wait to see how it works. I bet many will be amazed."

Mr Steininger, tell us something about your work.

What makes Linz’s municipal cinemas so different to the major cinemas?

What makes us special is that we show all our films in the original, with subtitles. But it’s our program which really differentiates us from the large cinema chains. Conventional cinemas tend to have a stereotypical program aimed at a general audience. We like to act as a counterbalance, demonstrating that there are other types of films out there.

What is the concept behind the Sommerkino? 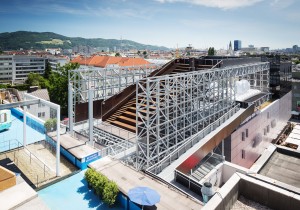 This year, for the first time, the Sommerkino will be held in the new voestalpine open space.

The Sommerkino is an open air cinema, a concept that’s been around for at least 15 years. To date, the Sommerkino has always been held in the OK Platz, and twice on the Parkdeck. It’s special because you can go to the cinema in beautiful weather and enjoy a breezy atmosphere. And at the Sommerkino, we tend to show lighter and more entertaining productions. This year, for the first time, the Sommerkino will be held in the new voestalpine open space.

What do you think is special about hosting the Sommerkino in the voestalpine open space?

It’s a construction – less of a building and more of a high bay warehouse – which lets guests enjoy an evening at the Sommerkino over the roofs of Linz. I’ve never seen anything like it before, and I can’t wait to see how it works. I bet many will be amazed.

Do you know of any similar project?

No, there’s nothing else like it, it’s unique. And I wasn’t explicitly looking for something like this, as I’m afraid of heights (laughs)…

What do you think of the voestalpine Group’s involvement in this project?

You can see that voestalpine has clear links with the location, and I find it’s involvement in cultural and artistic projects admirable. And especially because the voestalpine open space is a longer term project, something we’ll benefit from over a longer period – and that’s what makes it special.

What are the challenges involved in hosting a Sommerkino festival?

We have to be lucky with the weather, and it can’t be too windy. Another factor is noise pollution; that means it can’t go on too long into the night. But we can only start when it’s dark and the Höhenrausch exhibition has closed. However, the real challenge is designing the program: we need a diverse program running over two months. There are roughly 50 evenings on which films from the past year are shown. They have to be interesting and offer the public a certain something. The films can’t be too long, otherwise we have a problem with creating too much noise.

When does the Sommerkino take place?

The Sommerkino starts at the beginning of the school holidays in July, and goes on through to the end of August. It is followed by an Ars Electronica Festival project in September.
The atmosphere at these breezy heights is unique, and is sure to go down well. As the seating capacity isn’t enormous, many of the showings will certainly be booked up. So make sure you buy your tickets in advance!

What is your vision for the future?

I believe that the voestalpine open space will play a decisive role in helping to put Linz on the map. I hope that these summer projects will have knock-on effect on daily business.
But what’s most important for me is that the public is satisfied, and that after the visit the audience spreads the word.