The microcosmonaut from Düsseldorf, Germany

Instead of becoming an astronaut, Farwah Nahif decided to become a metallurgist. And that’s why this R&D manager at voestalpine eifeler in Düsseldorf spends her days researching the thin coating universe instead of the universe as such.

Farwah Nahif is the perfect role model for initiatives such as “Girls & Technology”—even though, in her case, such a program wasn’t even necessary to get her interested in solid state physics. Because, even when she was little, she always “played with building blocks instead of dolls,” says this R&D engineer (a native of Germany’s Rhineland), laughing: “My first professional ambition was to be an astronaut.” It is what Nahif actually did: “Except that I landed in the microcosm, not the macrocosm…” 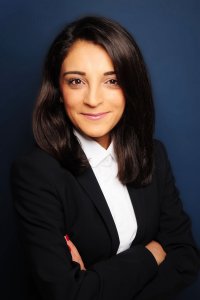 Thin coating technology is the realm this metallurgist and materials scientist has been researching since completing her doctorate at RWTH Aachen University. Nahif’s interest in this field transcends a mere working relationship: “One day, when I was still a student and working as an intern at my later doctoral adviser’s lab, I saw plasma for surface coatings for the very first time,” she remembers. “That was love at first sight, what can I say!” This love turned into a lifelong passion that has carried her since her studies, which she completed in 2013 with a dissertation on the phase stability of particular thin films. The text remains a mystery to laypeople even after reading it the second time … but it opened up lots of opportunities for her in the job market.

The Group’s expert for surfaces & coatings

Her choice to join Düsseldorf-based voestalpine eifeler was not long in coming. “Because eifeler, as part of the network of a worldwide Group, offers a unique opportunity for innovation above and beyond the parameters of pure coating technology. This network has the advantage that, on the one hand, I can work intensely on coatings but, on the other hand, also have lots to do with metals and toolmaking. It opens up my view to both the big picture and the application.” eifeler, the Düsseldorf-based coating specialist in the voestalpine Group, turned out be the ideal environment for this young woman, who was appointed deputy manager of the 16-member team during her first year in the firm’s research & development department. She has headed the department since the summer of last year. That’s a meteoric rise—and Farwah Nahif hadn’t even planned on it: “I never aimed for an executive position,” she says, “all I’ve ever wanted to do was to get things moving.”

A passion for R&D

And that’s what she does at voestalpine eifeler—not least thanks to her team. “What makes us excel as a team is our absolute intention to forge new approaches and develop solution-oriented ideas. But this can only happen in a company that embraces precisely this kind of mentality. In a stagnating company, R&D means doing the same thing over and over again. At voestalpine eifeler, however, we are always working on innovative and cutting-edge topics.”

Like, for example, the novel coating for tools used to form high-strength and thus ultra high-tensile sheet steel, which voestalpine eifeler is in the process of launching under the Duplex-VARIANTIC®-1400 brand name … with the promise that it helps to extend tools’ useful life fourfold, if not more.

A first in San Diego

The engineer’s qualifications have caught people’s attention, not just at voestalpine. In May of this year, she gave the industrial keynote speech at the renowned International Conference on Metallurgical Coatings and Thin Films in San Diego, California, USA. This was the first time a woman had done so in the world-famous event’s 46-year history. To top it off, her presentation departed from established custom at the conference. Instead of limiting herself to another aspect of thin coating technology, she placed coatings as such within the overarching context of the value chain at voestalpine—from the raw material to the finished tool. Using voestalpine as an example, she stated: “Being part of this value chain makes us unique in the field of wear-resistant coatings.”